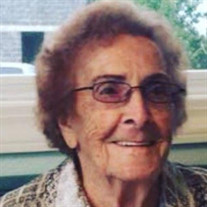 Jessie Alberta Hart Rogers, daughter of Jonas Arthur and Maude Shadrick Hart, was born December 16, 1923, in the family home near Macks Creek, Missouri. She departed this life Friday, October 22, 2021, in Mercy Hospital, in Lebanon, Missouri, at the age of ninety-seven years, ten months, and six days. On September 23, 1939, she was united in marriage to Claude Waterman in Eldridge, Missouri, and to this union one son was born. On July 22, 1946, she married her childhood love, Charles Earnest Rucker in Celt, Missouri. They shared forty-two years of happiness and memories, before Charles passed away on March 18, 1988. On April 28, 1994, she married Jervis Rogers and they shared four years before his passing on May 10, 1998. She was also preceded in death by her parents; a son, Jessie Dean Waterman; three brothers, Walter and Ward Shadrick and Bob Hart; and two sisters, Emma Hart and Pauline Hart Bailey. Alberta is survived by a brother, Clyde Hart, of Lebanon, Missouri; a sister, Maxine Hart Goffe, of Lebanon, Missouri; a number of nieces and nephews; as well as a host of other relatives and friends. She was raised in the Macks Creek community and attended Macks Creek School and then Ira School up to the eighth grade. Through the years, she was a devoted homemaker and after she and Charles were married, they made their home in Lebanon and then in LeClaire, Iowa and Pleasant Valley, Iowa for a number of years. She worked at the Rockingham Machine Company in Pleasant Valley for several years. After retiring, she and Charles moved back to the Lebanon, Missouri area. Alberta was baptized on April 19, 1956, in the Foursquare Gospel Church in LeClaire, Iowa where she taught Sunday school for several years. After returning to Missouri, she became a member of Trinity Full Gospel Church in Eldridge, Missouri. She was a very family oriented person who loved cooking for family and friends. She was renowned for her chicken and dumplings at family gatherings and cookouts. She enjoyed working in her flower beds and was often asked for starts of her beautiful flowers. Alberta was a loving sister, aunt, and was loved by every person whose life she touched. We celebrate her life and know that she will be deeply missed by all of her family.

The family of Alberta Rogers (Lebanon) created this Life Tributes page to make it easy to share your memories.