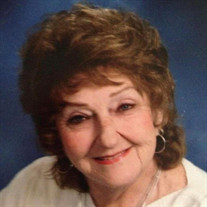 Alice Joann Wilsey, daughter of Raymond C. and Levona M. Jahr, was born December 19, 1938, in Kansas City, Missouri, She departed this life Thursday, June 10, 2021, in Mercy Hospital in Springfield, Missouri, at the age of eighty-two years, five months, and twenty-two days. On September 16, 1972, she was united in marriage to Harold Richard Wilsey, and they shared forty-one years before his passing on November 3, 2013. She was also preceded in death by her parents; a daughter, Vicki Lynn Lowrance; a son-in-law, Chris Richard Lowrance; and three brothers, Charley, Eugene, and Robert E. Jahr. Joann is survived by a daughter, Diana Pohlman, and her husband, Randy, of Herman, Missouri; two sons, Keith R. Lewis, and his wife Toni, of Topeka, Kansas, and Jeff Wilsey, and his wife, Cindy, of St. Charles, Missouri; a number of grandchildren, great-grandchildren, and great-great-grandchildren; several nieces and nephews; as well as a host of other relatives and friends. She was born in Kansas City, Missouri, and was raised in Kansas City and Olathe, Kansas. In the early 1990’s, she moved to Lebanon, Missouri, and made her home. She was a devoted homemaker and loving mother and also worked in accounting earlier in her life. After she and Harold were married, they continued to make their home in the Lebanon area. Joann had attended Community Baptist Church near Lebanon, Missouri. She enjoyed being outdoors and liked fishing, camping and playing golf. She loved her family dearly and especially enjoyed spending time with her grandchildren and great-grandchildren. Joann was a loving mother, grandmother, great-grandmother, great-great-grandmother, aunt, and was a caring friend. We celebrate her life and know that her family and friends will hold tight to the wonderful memories she made for them during her lifetime. A family service will be held at 8:00 A.M., Friday, June 25, 2021 at the Community Baptist Church in Lebanon, Missouri with Rev. Allen Reeves officiating. Burial will follow the service and be in the Missouri Veterans Cemetery in Springfield, Missouri.

The family of Alice "Joann" Wilsey (Lebanon) created this Life Tributes page to make it easy to share your memories.