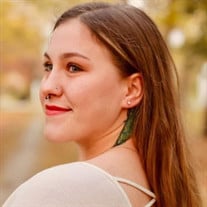 Amy Alyson Anderson, daughter of Aaron Anthony and Nina Ranee Anderson, was born September 4, 2002, in Lebanon, Missouri. She departed this life Tuesday, June 21, 2022, on South Highway Five from injuries received in an automobile accident, near Lebanon, Missouri, at the age of nineteen years, nine months, and seventeen days. She was preceded in death by her mother; her maternal grandparents, Wilma Daniels and David Laddusire; and her paternal grandmothers, Georgia Maxine Webster, and Carol E. Anderson. Amy is survived by her father, Aaron Anthony Anderson, of Lebanon, Missouri; a brother, Michael Hart, of Lebanon, Missouri; three sisters, Brooke Anderson, Ashley A. Anderson, both of Lebanon, Missouri, and Tereasa Hart, of Lawrence, Kansas; a Grandpa, Jesse Thomas, Sr. of Independence, Missouri; two uncles, Dennis Laddusire, Jesse Thomas, Jr. and wife, Sandra, of Camdenton, Missouri; an aunt, Gina Stevenson of Macks Creek, Missouri; several cousins; a host of other relatives and friends. She lived all of her life in the Lebanon area and graduated from Lebanon High School in the Class of 2020. She was well known as a successful wrestler and a decorated athletic runner while in high school. She had worked at Sonic Drive In and was currently employed by an Express Stop Convenience Store. She was strong willed and had a strong personality. She loved animals, working on the farm, and liked studying animal husbandry. She was outgoing, very kind and possessed a good sense of humor. She loved her family and enjoyed spending time with them. Amy was a loving daughter, sister, niece, and was a caring friend. We celebrate her short life, and know that she will be fondly remembered and greatly missed by all those who knew and loved her. A memorial has been established to Claws and Paws or to the family and donations may be made through the funeral home.

The family of Amy Alyson Anderson (Lebanon) created this Life Tributes page to make it easy to share your memories.