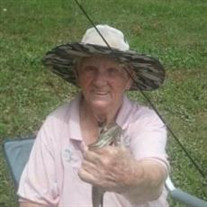 Audrey Ozelle Candler, daughter of Hyland and Lillian E. Robinson Brim, was born March 9, 1927, near Nebo, Missouri. She departed this life Friday, December 31, 2021, in her home, near Waynesville, Missouri, at the age of ninety-four years, nine months, and twenty-two days. On June 28, 1947, she was united in marriage to William A. Candler, and to this union four daughters were born. William passed away in 1969. She was preceded in death by her parents; her husband; as well as two grandchildren, Donnie Grimes and Mark Neasby. Audrey is survived by her four daughters, Billie Mitchell, of Waynesville, Missouri, Audrey Hash, of Mansfield, Missouri, Mary Ann Hash, of Hartville, Missouri, Janie Clarke, of Niangua, Missouri; twelve grandchildren; sixteen great-grandchildren, three great-great-grandchildren; several nieces and nephews; as well as a host of other relatives and friends. She grew up in the Nebo and Abo communities. She attended the Blackbird School. Audrey worked as a homemaker throughout her life. In the early 1970’s Audrey made her home in Lebanon, Missouri, she later moved to a farm near Phillipsburg, Missouri and then later retired to Waynesville, Missouri. Audrey attended the Nebo Christian Church during her life. She was full of life and enjoyed making eggnog, reading, fishing, and being outdoors. She loved animals and especially enjoyed spending time with her children, grand-children and her other family members. Audrey was a loving wife, mother, grandmother, great-grandmother, great-great-grandmother, sister, aunt and was a caring friend. We celebrate her life and know that her family and friends will cherish the wonderful memories she created for them during her lifetime. All arrangements are private. Burial will be in the Nebo Christian Cemetery at a later date.

Audrey Ozelle Candler, daughter of Hyland and Lillian E. Robinson Brim, was born March 9, 1927, near Nebo, Missouri. She departed this life Friday, December 31, 2021, in her home, near Waynesville, Missouri, at the age of ninety-four years,... View Obituary & Service Information

The family of Audrey O. Candler (Lebanon) created this Life Tributes page to make it easy to share your memories.