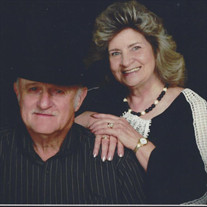 Gordon and Barbara Vogt, high school sweethearts who were married one month short of 56 years, died within a week of each other. Barbara, age 74, died Tuesday, July 20, 2021 in Texas County Memorial Hospital in Houston, Missouri. Gordon, age 74, died Wednesday, July 28, 2021 in University Hospital, Columbia, Missouri. Born April 28, 1947, Gordon Orville Vogt was the son of Orville and Shirley Vogt. Barbara Sue Cantrell Vogt was the daughter of Robert and Edith Cantrell. She was born January 11, 1947. Both Gordon and Barbara grew up in the House Springs area near St. Louis, Missouri. They graduated from Northwest High School as part of the Class of 1965. On August 13, 1965, they were married at Fellowship Baptist Church in High Ridge. In 1973, the couple moved to the Mansfield area as owners of the Bryant Springs trout farm between Mansfield and Ava. They operated that business until 1980, when they began farming chickens and cows. What started with one chicken farm location in 1980 expanded over the years into three locations. While Barbara helped Gordon with the chicken operations, she also worked at Ace Hardware in Mansfield, and owned and operated two beauty salons in Mansfield. Together, they raised two sons, Gordon Allen “PeeWee” Vogt and Rodney Vogt. As adults, both sons worked alongside their parents in the family farming business. Gordon and Barbara were long-time members of the Mansfield First Baptist Church. Gordon was generous in funding and working on special church projects, and Barbara was generous with her time and talents. She did whatever job was asked of her, including tending the nursery, decorating for special events, cooking and serving funeral dinners, teaching VBS and more. Barbara served more than once as director of Vacation Bible School, planning schedules, recruiting teachers, entertaining the children with puppets, and making sure the event ran smoothly. In addition to serving in her local church, for years Barbara went on summer mission trips with the Wright-Douglas-Ozark Baptist Association to Canada, Nebraska, and other locations. Both were good athletes in their younger years. Barbara played softball and bowled, and Gordon played baseball, bowled, and golfed. Gordon liked to hunt, and also had a 55-year-long record of traveling to Canada with friends and family on an annual fishing trip to an area so remote that the group had to be flown into the camp. Barbara was known for her love of animals of every kind, and over the years, she raised sheep, cougars, miniature donkeys, and more. She liked to cook for her family, collect antique glassware, do geneology research, and quilt. She loved to make cards and scrapbook, and traveled at least twice a year with friends to retreats, crops, and condo getaways. Together, the couple doted on dogs Shatzi and Sugar, and Barb’s black cat, Meow-Meow. Gordon and Barbara are survived by sons Gordon “PeeWee” and Cindy of Mansfield, and Rodney of Mtn. Grove. Grandchildren, including ones they welcomed as family, are Kaylyn Lafferty (and husband Dustin); Spencer Vogt (and mother Janna Vogt); Tiffany Cline; Tracey Cline-Farris, and Jamie Gunkel. Great-grandchildren are Kaylyn’s children Korvin and Lily, plus 11 others they loved and accepted as family. One of those much-loved additions was Kyndall Cody, who often camped out at Gordon and Barbara’s house on weekends, tagged along on special adventures, and went to church and Sunday lunches with them. In addition to their shared family, Gordon’s survivors are his sister, Ruth Vogt Porter; nieces and nephews John, Jennifer, and Becky; his stepmother, Mickey Vogt; stepbrothers Dan and David, and stepsister Pat. Barbara’s additional survivors are her brother, Kenneth Cantrell (and Trish), and several nieces and nephews. Graveside Services will be at 10:30 a.m. Tuesday August 3, 2021 in Denney Cemetery south of Seymour on Highway K in Douglas County. Memorial contributions may be made to the Wright-Douglas-Ozark Baptist Association mission trip fund.

The family of Barbara and Gordon Vogt(Mansfield) created this Life Tributes page to make it easy to share your memories.

Gordon and Barbara Vogt, high school sweethearts who were married...

Send flowers to the Vogt(Mansfield) family.