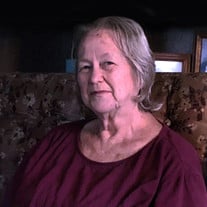 Barbara Lee Inman passed away Tuesday, March 8, 2022 peacefully in her home surrounded by her loving family. Barbara was born May 6, 1945 to Francis Howard and Edna Claudine (McCallister) Lauder. She spent her childhood growing up on the family farm in Sleeper, Missouri. She attended Stoutland School and enjoyed spending time with her classmates. On October 5, 1962, she married a young man from Oakland, James Gerald Inman. Soon after, they bought their farm at Russ, and lovingly raised their three children there; Patricia Ann, Teresa Marie and James Joseph, and where she lived until her passing. Barbara worked for over 30 years for the H. D. Lee Company, where she gained many dear and true friends which meant the world to her. Through her years of working she collected birdhouses, and before her memory began to fail her, she could tell you who had given her each and every one of them. She was a simple woman, wanting no more than to enjoy each little moment of life. She loved spending her time outdoors, especially tending to her beautiful flowers. She truly loved life. Family, and family love was important to Barbara. She loved gathering with her mom and dad, brothers and sisters, and their families for a reunion at the river for many years; and having the Inman's all come for a Sunday dinner. Barbara enjoyed teaching Vacation Bible School at New Hope Baptist Church when her children were young. She also loved having the youth groups from Second Freewill Baptist Church and Hillcrest Baptist Church for a hay ride, wiener roast, and fellowship by a bonfire for many years. Barbara especially enjoyed listening to the tall tales told on their back porch by the wood stove each deer season! She loved cooking for all the hunters, each and every one of them! She was honored by the names, Old Woman or Mauzy, as they referred to her. She truly missed cooking or them when her health began to fail her. One of her greatest joys was to become Grandma Barbara and MaMa! She spent countless hours sitting in the front porch swing with Jennifer, Joshua and Justin visiting and awing over nature. She enjoyed them bringing their friends with them, and hearing their laughter! Oh, the joy of a grandma's heart, to become a great/ grandma! First, came Faith. Barbara held a special place in her heart for Faith's momma, Lindsey. Then came Paisleigh, Grady and Griffin. How she loved that Paisleigh! She would come spend time at the farm just like her momma had, that Grady would play with the old cars and wooden blocks just like his daddy had, that Faith and Griffin came to fish in the same ponds just like their daddy had. These small things melted her heart, and gave her the biggest smile. She was preceded in death by her parents; her in/laws, Gerald and Myrtle Inman; sisters, Enola Edith Lauder, and Laura A'quino; sister-in-law, Julia Sien; daughter-in-law, Birdie Inman; and Faith's momma, Lindsey Smith. Barbara is survived by her husband of 59 years, James Inman; two daughters, Patty and David Cates, and Teresa Inman; one son, Joey Inman, all of Lebanon, Missouri; one granddaughter, Jennifer and Tyler Brown of Hackett, Arkansas; two grandsons, Joshua and Devin Inman, and Justin and Whitney Inman, all of Lebanon, Missouri; two great-granddaughters, Faith Inman, and Paisleigh Brown; four great-grandsons, Grady Inman, Griffin, Holden and Heston Inman. Also surviving; two brothers, Bill and Jana Lauder of Stoutland, Missouri, and Stan and Janice Lauder of Long Lane, Missouri; one sister, Janet Lauder Garcia, unknown; sisters-in-law, Ellen and Maury Schaubroeck of Russellville, Arkansas, and Linda and Glen Sien of Lebanon, Missouri; brothers/in/law, David and Renee Inman of Lebanon, Missouri, and Virgil Sien of Sleeper, Missouri. As each of you witness a bud bloom into a fragrant rose each spring, or the smell of cut hay each summer, or the leaves changing colors in the fall, or see a red cardinal against the wintery white background of a snow fallen day, know that you were loved as her husband, her daughter, her son, her granddaughter, her grandson, her brother, her sister, or her friend, and for ever brought her joy!

Barbara Lee Inman passed away Tuesday, March 8, 2022 peacefully in her home surrounded by her loving family. Barbara was born May 6, 1945 to Francis Howard and Edna Claudine (McCallister) Lauder. She spent her childhood growing up on the family... View Obituary & Service Information

The family of Barbara Inman (Lebanon) created this Life Tributes page to make it easy to share your memories.