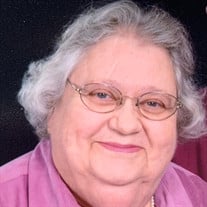 Barbara Sue Montgomery, daughter of Paul and Nellie Wills Prosser, was born April 30, 1937, near Phillipsburg, Missouri. She departed this life Friday, May 27, 2022, in Lebanon South Nursing and Rehabilitation Center, in Lebanon, Missouri, at the age of eighty-five years, and twenty-seven days. On August 21, 1955, she was united in marriage to Jack Dean Montgomery, and to this union one daughter and one son were born. She was preceded in death by her parents; her husband of sixty-three years, Jack, on February 6, 2019; a daughter-in-law, Mary; a sister-in-law, Ruth Amos; and her mother-in-law, Chloe Montgomery. Barbara is survived by a daughter, Lea Ann Bailey, and her husband, Jason, of Raymore, Missouri; a son, Craig Montgomery, and his wife, Cathy, of Lebanon, Missouri; a number of grandchildren and step-grandchildren, including a grandson that Barbara helped raise, Elijah Bailey; two brothers-in-law, Jerry Montgomery, and his wife, Suzanne, of Bentonville, Arkansas, and Eddie Amos, of Lebanon, Missouri; two sisters-in-law, Beverly Doerge, and her husband, Ken, of Overland Park, Kansas, and Bonnie Gray, and her husband, Ron, of Lebanon, Missouri; several nieces and nephews; as well as a host of other relatives and friends. She was raised on the family farm near Phillipsburg, Missouri, as part of a pioneer farming family in the area, and graduated from Phillipsburg High School. After she and Jack were married, they made their home in the Morgan community until moving to Phillipsburg in 1969. They then made their home in Nebraska for a time before returning to the Lebanon area. Barbara was a devoted homemaker and farmer’s wife through the years. Barbara made her profession of faith in Christ early in her life and she and Jack were longtime members of Morgan Baptist Church. For the last several years, they had been active members of Hillcrest Baptist Church. In her spare time she enjoyed fishing, bird watching, working puzzles, playing dominoes and games on her I-pad. She loved her family dearly and was very proud of her family and their heritage. Barbara was a loving mother, grandmother, sister, aunt, and was a caring neighbor and friend. We celebrate her life and know that her family and friends will cherish the wonderful memories she created for them during her eighty-five years. A memorial has been established for the Baptist Children's Home and Hillcrest Baptist Church, and donations can be made through the funeral home.

The family of Barbara Sue Montgomery (Lebanon) created this Life Tributes page to make it easy to share your memories.