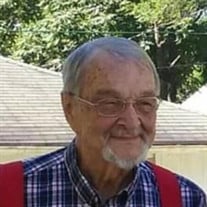 Benner S. Rhodes, Jr. passed June 30, 2021 at the age of 91 years and 6 months. Benner was born December 27, 1929 in Springfield, Missouri to Benner and Lorenda Cantrell Rhodes. After graduating from Mansfield High School in 1947, Benner enlisted in the United States Air Force. He served during the Korean War and was discharged in 1955. Benner married Wanda Murphy in Hardy, Arkansas on October 5, 1951 and to this union five children were born. Dave Rhodes, Patrice Jones and husband, Bill, all of Mansfield, Missouri, Rebecca Robinson and husband, Mike, of Hardy, Arkansas, Mark Rhodes and wife, Glenda, of Ava, Missouri and Jack Rhodes and wife, Elaine, of Mansfield, Missouri who all survive. He is also survived by a sister, Virginia Baldridge of Springfield, Missouri; a niece; 11 grandchildren, 28 great-grandchildren, and 5 great-great-grandchildren. In June of 1974 he married Ferne Pressgrove Bailey. Benner moved to Illinois in 1967 and was employed by Brown Shoe Company where he worked for 20 years, retiring in 1987. In his spare time, Benner had a passion for hunting and hound dogs. Graveside services will be Friday, July 2 at 3 p.m. in Hensley Cemetery, north of Mansfield, with Pastor Stan Collins officiating. Arrangements are under the direction of Holman-Howe Funeral Home of Mansfield.

The family of Benner Rhodes, Jr. (Mansfield) created this Life Tributes page to make it easy to share your memories.