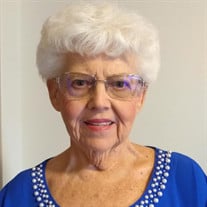 Bennie Louise Elmore, daughter of Bert and Beulah Blevins Freeman, was born April 8, 1940, in Buffalo, Missouri. She departed this life Friday, February 4, 2022, in her home, near Conway, Missouri, at the age of eighty-one years, nine months, and twenty-seven days. On December 21, 1973, she was united in marriage to Charles Henry Elmore, Sr. She was preceded in death by her parents; her husband, Charles, on October 30, 2009, four brothers, Jim Freeman, C. B. Freeman, Jack Freeman, and his wife, Juanita, and Richard “Buzz” Freeman; and one sister, Evelyn Sue Freeman. Bennie is survived by three daughters, Paula Clark, and her husband, James, of Conway, Missouri, Tammy Garner, of Kansas City, Missouri, and Deborah Brown, and her husband, Jack, of Lebanon, Missouri; a son, Charles Elmore, Jr., of Lebanon, Missouri; twelve grandchildren; twenty-two great-grandchildren; three great-great-grandchildren; sisters-in-law, Effie Henson, of Lebanon, Missouri, and Nell Freeman, of Mustang, Oklahoma; a number of nieces and nephews; as well as a host of other relatives and friends. She was born and raised in Dallas County, and graduated from Buffalo, Missouri. After she and Charles were married, they made their home in Lebanon, Missouri. She worked as a hair stylist, both in Buffalo and Lebanon as well as teaching cosmetology in Lebanon. She was a devoted homemaker to her husband and family. Later she made her home in Adams Place where she made many wonderful friends. Bennie had professed her faith in Christ and was an active member of Washington Christian Church. She enjoyed playing cards and Dominos in her spare time. She was always interested in what was going on with her friends and especially her family. She loved all of her family dearly and particularly liked being with all her grandchildren. Bennie was a loving mother, grandmother, great-grandmother, great-great-grandmother, aunt and was a caring friend. We celebrate her life and know that her family and friends will cherish the wonderful memories she created for them during her lifetime. Services for Bennie Elmore will be Wednesday, Feb. 9, 2022 at 11 a.m. at Holman-Howe Funeral Home of Lebanon. Visitation will be Tuesday, Feb. 8 from 5 - 6:30 p.m.. in the funeral home. Burial will be in Antioch Cemetery. A memorial to Antioch Cemetery has been established and donations may be left at the funeral home.

Bennie Louise Elmore, daughter of Bert and Beulah Blevins Freeman, was born April 8, 1940, in Buffalo, Missouri. She departed this life Friday, February 4, 2022, in her home, near Conway, Missouri, at the age of eighty-one years, nine months,... View Obituary & Service Information

The family of Bennie L. Elmore (Lebanon) created this Life Tributes page to make it easy to share your memories.