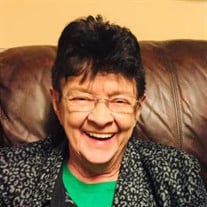 Bettie Ann Whipple, daughter of Clyde E. and Ruth McNealy Long, was born December 7, 1945, near Grovespring, Missouri. She departed this life Monday, February 21, 2022, in her home, in Lebanon, Missouri, at the age of seventy-six years, two months, and fourteen days. On July 10, 1965, she was united in marriage to Harvey Leon Whipple, and they shared forty-seven years of happiness before his passing on April 8, 2012. She was also preceded in death by her parents; one brother, Owen Long; a sister-in-law, Connie; and a niece, Brenda Delcour. Bettie is survived by two brothers, Donald Long, and his wife, Cathern, of Hartville, Missouri, and Ronnie Long, of Grovespring; a sister in-law, Beulah Long, of Hartville, Missouri; a number of nieces and nephews, Charles Long, and his wife, Luciana, Kimberly Long Ersland, and her husband, Robin, Scott Long, and his wife, Sheila, Brady Long, Roger Long, and his wife, Joyce, and Marcie Long; a number of great-nieces and great-nephews; as well as a host of other relatives and friends. She was born and raised in the Grovespring community and graduated from Hartville High School. After she and Harvey were married, they made their home in the Lebanon area. Bettie was a devoted homemaker to her husband and worked as a seamstress and sales clerk until retiring. Bettie professed her faith in Christ early in her life and was baptized into Little Creek Baptist Church. She liked playing card games with her family, traveling, going to casinos and taking trail rides in Texas. Her family was very important to her and she especially enjoyed spending time joking and laughing with her nieces and nephews who she considered her children and grandchildren. Aunt Boop was a good cook and was particularly known for her chicken and noodles. Bettie was a loving sister, aunt, and was a caring friend. We celebrate her life and know that her family and friends will remember her fondly and hold tight to the good memories they have shared with her. In lieu of flowers, memorials to Integrity Hospice and St. Jude Children’s Research Hospital have been established and contributions may be made through the funeral home. Services for Bettie will be Monday, Feb. 28 at 2 p.m. at Holman-Howe Funeral Home in Lebanon. Visitation will be held one hour prior to the service. Burial will be in Mount Rose Memorial Park.

Bettie Ann Whipple, daughter of Clyde E. and Ruth McNealy Long, was born December 7, 1945, near Grovespring, Missouri. She departed this life Monday, February 21, 2022, in her home, in Lebanon, Missouri, at the age of seventy-six years,... View Obituary & Service Information

The family of Bettie A. Whipple (Lebanon) created this Life Tributes page to make it easy to share your memories.