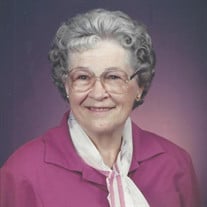 Betty Ann (Wood) Barr was born June 20, 1931 at Hartville, Missouri, to Lewis Paul and Iva Ann (Rowe) Wood. She departed this life June 15, 2021, in her home at Hartville, Missouri at the age of eighty-nine years, eleven months and twenty-six days. On Easter Sunday, April 9, 1950, Betty was united in marriage to Billie Eugene Barr and to this union two sons and three daughters were born. They celebrated sixty-two years together and he preceded her in death in 2012. Also preceding her in death were her parents, a brother, Joe Wood and a sister, Georgia Wood. Betty is survived by her loving family; sons, Donald Barr and his wife Donna of Mountain Grove, Missouri, Daniel Barr and his wife Crystal of Hartville, Missouri,; daughters, Shirley Dugger and her husband Jerry of Grovespring, Missouri, Katherine Barr of Springfield, Missouri, Nancy Shaver and her husband Wayne of Hartville, Missouri; nine grandchildren; Jared Shaver and wife Tabitha, John Dugger and wife Hayden, Jenna Storie and husband John, Gina Barr, Rebeccah Harris and husband Cody, Ashley Barr, Anna Olson and husband Nathan, Grant Barr and wife Jade and Benjamen Barr and fiancé Rebecca Cooper, seventeen great-grandchildren; Mellie Barr, Cameron and Reese Harris, Carter, Aubree and Avery Dugger, Jarica, Jovia, Jayla and Juneva Shaver, Naudia, Katja and Ragner Storie, Mark Barr, Anthony Calton, Elizabeth Barr, and one baby girl Barr on the way; her brothers, Jerry, Jackie and Jessie Wood, sisters; Hazel Crighton, Dollie Wood, Helen Wood and Lottie Wedgeworth; as well as a number of nieces, nephews, a host of other relatives and many dear friends. Betty attended county schools of #3 school, Crawford and Dry Branch. She graduated from Hartville High School in 1949. She was saved at an early age and has been a member of the First Baptist Church in Hartville since 1962. Betty was very talented at crocheting and quilting. She enjoyed canning fruits and vegetables from the garden, tending to her flowers and selling eggs from the chickens that she raised. Betty was a homemaker and worked as a seamstress for 20 years at HD Lee until its closing and then she worked three years at the Hartville Thrift Store. She spent much of her life caring for others; her brothers and sisters while growing up, nieces and nephews over many summers and her parents and in-laws in their declining years. Betty was a loving wife, mother, grandmother, great-grandmother, sister, aunt and a caring neighbor and friend. We celebrate her life and her many accomplishments. We will treasure the many wonderful memories she has created for her family and friends. Services will be held Friday, June 18, 2021, at 2:00 PM in Holman-Howe Funeral Home of Hartville, MO. Visitation will be Thursday, June 17, 2021, 6:00 to 8:00 PM in the funeral home. Burial will be in Coldwater Cemetery, north of Hartville on Hwy. T at 9900 Coldwater Dr., Hartville. Memorials can be made to Coldwater Cemetery through Holman-Howe Funeral Home of Hartville.

The family of Betty Ann Barr (Hartville) created this Life Tributes page to make it easy to share your memories.