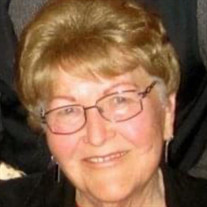 Betty Jean Hofman, daughter of Clarence and Lena Martin Davis, was born March 5, 1928, in Decaturville, Missouri. She departed this life Saturday, November 27, 2021, in her daughter’s home, in Springfield, Missouri, at the age of ninety-three years, eight months, and twenty-two days. On January 27, 1944, she was united in marriage to Roma Lee Hofman, and to this union two daughters and one son were born. She was preceded in death by her parents; her husband, Roma, on April 11, 2002; a son, Jerry Hofman; a great-grandson, Billy Mustard; a son-in-law, Jack Miller; three brothers, Clarence “Buster” Davis, Jack Davis, and Don Davis; and an infant sister. Betty is survived by two daughters, Beverly Miller Keltner, and her husband, Mike, of Springfield, Missouri; and Barbara Daniel, and her wife, Cindy, of Fayetteville, Arkansas; a daughter-in-law, Karen Hofman, of Lebanon, Missouri; six grandchildren, Lindsay Goodison, of Annapolis, Maryland, Eric Miller, of Camdenton, Missouri, Kara Johnson, of Conway, Missouri, Kelli Mustard, of Lebanon, Missouri, Matthew Rogers, of Springfield, Missouri and Tucker Rogers, of Republic, Missouri; seven great-grandchildren, Barrett, Eric, Jace, Ethan, Bodhi, Luna, and Ava; several nieces and nephews; as well as a host of other relatives and friends. Her family made many moves while she was a child including Whittier, California, the Lebanon area where Betty attended Reagan School and Buffalo High School where she met Roma. After she and Roma were married, they lived in Kansas for a time until Roma joined the United States Air Force. They lived in Texas for a time and then when Roma was transferred to Las Vegas, she went to live with her family in California. After Roma was honorably discharged, they moved back to Buffalo and farmed for a couple of years. They then made their home in Wichita, Kansas, where Betty worked at a grocery store until Beverly was born. She then became a devoted homemaker and mother and was involved in school as a room mother and a Girl Scout leader. The family then moved back to Buffalo and became partners with Betty’s dad in a grade A milking operation. Later, Roma went into the service station business and owned several stations in and around Lebanon for the next thirty years. Betty also did the bookkeeping for all of Roma’s businesses. Whether it was watching Beverly cheering at a basketball game, or Jerry playing sports, or Barbara in band or drama, Betty and Roma were always there. Betty was a member of Southern Heights Christian Church and was always involved in church activities including teaching Sunday school and helping with the library. She later became a member of Phillipsburg Christian Church, where she headed the funeral food committee. Betty loved her family dearly and especially enjoyed having time with her grandchildren and great-grandchildren. Betty’s mother took care of her mother who was bed ridden for fourteen years, then Betty took care of her mother who was bed ridden and later Betty’s family took care of Betty during the last of days of her life. Betty was a loving mother, Nana, sister, aunt, and was a caring friend. We celebrate her life and know that her family and friends will cherish the wonderful memories she created for them during her ninety-three years. Services will be 2:00 p.m. Thursday, December 2, 2021 in Holman-Howe Funeral Home with Rick Howerton officiating. Burial will be in Mount Rose Memorial Park. Friends may call at their convenience. Memorials to Phillipsburg Christian Church / Hospice Compassus

Betty Jean Hofman, daughter of Clarence and Lena Martin Davis, was born March 5, 1928, in Decaturville, Missouri. She departed this life Saturday, November 27, 2021, in her daughter&#8217;s home, in Springfield, Missouri, at the age of ninety-three... View Obituary & Service Information

The family of Betty J. Hofman (Lebanon) created this Life Tributes page to make it easy to share your memories.