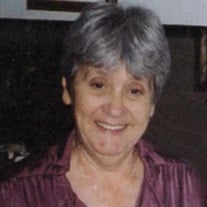 Betty Irene Lawson, daughter of Marlin Cornelius and Vera Mae Biereis Akins, was born February 12, 1944, in Eagle Grove, Iowa. She departed this life Wednesday, December 8, 2021, in Mercy Hospital, in Lebanon, Missouri, at the age of seventy-seven years, nine months, and twenty-six days. On June 18, 1961, she was united in marriage to Edward Lawson. She was preceded in death by her parents; three brothers, Billy, Roy and Michael; and three sisters, Rita, Patty, and Judy. Betty is survived by her husband of sixty years, Edward, of the home; four sons, David Lawson, and his wife, Angela, of Lebanon, Missouri, Jimmy Lawson, of Springfield, Missouri, Jerry Lawson, of Lebanon, Missouri, and Michael Lawson, of the State of Florida; two grandchildren, James Edward and Lindsay JoAnn Lawson; three brothers, Robert D. Akins of Kansas City, Missouri, Frances W. Akins, of Lenexa, Kansas, and Richard Akins, of Statford, Iowa; several nieces and nephews; as well as a host of other relatives and friends. She was born and raised in Eagle Grove, Iowa and received her education there. After she and Edward were married, they made their home in the Lebanon area and lovingly raised their children. Betty worked hard at being a good homemaker and also liked to travel with her husband on his long distance runs. She loved her family dearly and especially enjoyed having time with her grandchildren. Betty was a loving wife, mother, grandmother, sister, aunt, and was a caring friend. We celebrate her life and know that she will be fondly remembered and greatly missed by all those who knew and loved her.

The family of Betty I. Lawson (Lebanon) created this Life Tributes page to make it easy to share your memories.