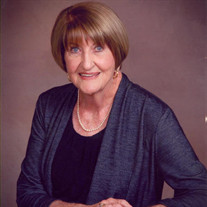 Betty Frances Grimes Nusbaum, daughter of Jack Ruble and Della Florence Euison Ringo, was born April 13, 1937, in Parsons, Kansas. She departed this life Thursday, July 1, 2021, in Cedarhurst Senior Living in Lebanon, Missouri, at the age of eighty-four years, two months, and eighteen days. On December 21, 1958, she was united in marriage to Jim Charles Grimes, and to this union one daughter and one son were born. Jim passed away on February 1, 1984. On February 7, 1997, she married Warren Nusbaum, who passed away on May 8, 2020. She was also preceded in death by her parents; and two brothers-in-law, Don H. Luellen and Vern Nusbaum. Betty is survived by a daughter, Konya Kay Dampier, of Lebanon, Missouri; a son, Brett James Grimes, and his wife, Ann, of Lebanon, Missouri; three grandchildren, Nathan James Grimes, Hayley Marie Porter, and her husband, Rich, and Dalton Kaleb Dampier; three great-grandchildren, Daisy Jade Porter, Abel James Porter, and Kaden Lee Dampier, and one eagerly anticipated great-grandchild, Karter Dampier; three sisters, Patsy Simmons, and her husband, John, of Wichita, Kansas, Linda Mayfield, and her husband, Jim, of Kansas City, Missouri, and Jane Hiller, and her husband, Mike, of Buckhead, Georgia; a number of nieces and nephews, including a niece, Linda Wirchak, of Spokane, Washington; as well as a host of other relatives and friends. She was raised in Parsons, Kansas, where she graduated from high school. She was given much responsibility in helping care for her younger sisters, especially Jane, as her parents worked different shifts. She loved working with children in many capacities all of her life. She had a wonderful childhood with hard working parents and she and her sisters spent many hours outside in their small town neighborhood playing jacks, roller skating, bike riding, hide & seek, and freeze tag. Betty always loved school and eagerly wanted an education. She started her first job at the age of fourteen at a five & dime store and then followed that with four years at a photography and photo shop. While in college she worked two jobs and carried a full load of credits. Money from these jobs was mostly put into savings which helped pay for her college expenses along with a P.T.A. Scholarship. She graduated from Pittsburg State College in 1958. She began her teaching career in Kansas City as Jim attended Kansas City School of Dentistry. Following his graduation, the couple moved to Moses Lake, Washington where Jim was an Air Force dentist at Larson Air Force Base. After two years, they moved to Lebanon, Missouri to establish their home and Jim’s dental practice. During the next several years, Betty was a devoted homemaker and lovingly cared for her children. She also was a Boy Scout and Brownie leader when her children were young. Following Jim’s unexpected death, Betty returned to teaching and taught at Joel E. Barber School from 1984 until retiring in 1997, when she married Warren. Betty made her profession of faith at a young age and was a longtime active member of Southern Heights Christian Church where she taught Sunday school classes and was involved in all sorts of activities. She had a deep faith in God and witnessed her love and extended her services to God all of her life. She was a fifty year member of Chapter EO of P.E.O. in Lebanon. She enjoyed playing bridge, reading, working in her flower garden, browsing in thrift stores, and taking vacations with her sisters. She especially appreciated and treasured time with her family and friends, many who had been acquaintances of hers for over fifty years. Betty was a loving mother, grandmother, great-grandmother, sister, aunt, and was a caring friend. We celebrate her life and know that her family and friends will cherish the wonderful memories she created for them during her lifetime. A memorial to the PEO Education Fund or to Southern Heights Christian Church has been established and may be left at the funeral home.

The family of Betty Grimes Nusbaum (Lebanon) created this Life Tributes page to make it easy to share your memories.