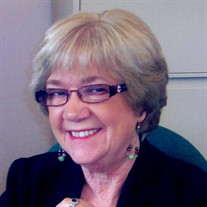 Betty Lou Robison, daughter of Jesse and Gladys Barnett Janes, was born January 4, 1941, in Lebanon, Missouri. She departed this life Monday, August 9, 2021, in Lebanon South Nursing and Rehabilitation Center, in Lebanon, Missouri, at the age of eighty years, seven months, and five days. On April 11, 1986, she was united in marriage to James O. Robison, and they shared the last thirty-five years. She was preceded in death by her parents; a great-grandson, Casen; and two brothers, Harold and Jimmy Janes; and a special aunt and uncle, Helen and Billy Barnett. Betty is survived by her loving husband, James, of the home; two daughters, Teresa Jones, of Lebanon, Missouri, and Melissa Broyles, and her fiancé, Dave, of Licking, Missouri; a step-daughter, Dawn Duff, and her husband, Ed, of the State of New Mexico; two step-sons, James Robison, Jr., and his wife, Caryn, of Broken Arrow, Oklahoma, and Mark Robison, and his wife, Nancy, of the State of Alabama; four grandchildren, Joseph Williams, and his wife, Joni, Michael Paul, Jessica Hoff, and her husband, Gary, and Jacob Paul, and his wife, Samantha, all of Lebanon, Missouri; a number of great-grandchildren; a brother, Larry Janes, of the State of California; three sisters, Bernice Pryor of the state of California, Pat Smith and her husband, Brian, and Linda Janes, all of the state of Oregon; three half-sisters, Maria Gomes and Annette Gomes, both of the State of California and Jeannette Gomes, of the State of Nevada; a number of nieces and nephews; as well as a host of other relatives and friends. She was born and raised in the Lebanon area and attended Lebanon R-III Schools. She continued to make her home in Lebanon where she was employed by Central Bank from 1969, until moving to Colorado and eventually to Merced, California. She worked in the banking business and also was a devoted homemaker to her husband and family. In 2009, she and James moved back to Lebanon. She was lovingly called “Grandma Boop” and loved her family dearly. She enjoyed going to and having yard sales. She was steadfast in her convictions and strong willed in her opinions. Betty was a loving wife, mother, grandmother, great-grandmother, sister, aunt, and was a caring friend. We celebrate her life and know that her family and friends will hold tight to the wonderful memories she created for them during her lifetime. Funeral services for Mrs. Robison will be Saturday, Aug. 14 at 2 p.m. at Holman-Howe Funeral Home of Lebanon with Rev. Gary Sheets officiating. Visitation will be Friday, Aug. 13 from 6 - 7:30 p.m. in the funeral home. Burial will be in Mount Rose Memorial Park.

The family of Betty Lou Robison (Lebanon) created this Life Tributes page to make it easy to share your memories.