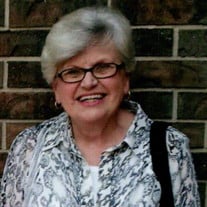 Betty Sue Snook, daughter of Virgil and Flossie Richardson Beard, was born January 14, 1939, in Lebanon, Missouri. She departed this life Friday, January 28, 2022, in Lebanon North Nursing and Rehabilitation Center, in Lebanon, Missouri, at the age of eighty-three years, and fourteen days. On January 20, 1960, she was united in marriage to Burl D. Snook, and to this union one daughter and two sons were born. She was preceded in death by her parents; and a son, Rick Snook. Betty is survived by her husband of sixty-two years, Burl, of the home in Lebanon, Missouri; a daughter, Jackie Shumate, and her husband, Bill, of Lebanon, Missouri; a son, Brent Snook, of Lebanon, Missouri; four grandchildren, Chad Shumate, and his wife, Krystal, Chase Shumate, and his wife, Patrice, Addison Snook, and Courtney Herron; six great-grandchildren, Everly, Quinn, Oliver, Henry, Conner and Alli; as well as a host of other relatives and friends. She was born and raised on a farm near Lebanon, and graduated from Lebanon High School in the Class of 1956. After she and Burl were married, they made their home near Lebanon and lovingly raised their family. Betty worked for Empire Gas for a time but was basically a devoted homemaker to her husband and family through the years. Betty was baptized at an early age into the Church of Christ and was an active member of Hayes Street Church of Christ throughout her life. She and Burl enjoyed traveling and liked spending time at the Lake. She also enjoyed playing cards and taking care of her home. She had a good sense of humor, was quick witted and liked having fun. Her family was always in the center of her life and she especially enjoyed having time with her grandchildren and great-grandchildren. Betty was a loving wife, mother, grandmother, great-grandmother, and was a caring friend. We celebrate her life and know that her family and friends will cherish all the wonderful memories she created for them during her eighty-three years. Funeral services will be Tuesday, Feb. 1, 2022 at 11 a.m. at Holman-Howe Funeral Home in Lebanon. Visitation will be Monday, Jan. 31 from 5 - 6:30p.m. in the funeral home. Burial will be in Mount Rose Memorial Park. A memorial has been established to St. Jude's Children's Hospital and donations may be left at the funeral home.

The family of Betty S. Snook (Lebanon) created this Life Tributes page to make it easy to share your memories.