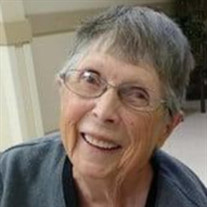 Betty Jane Lue (Lehman) Vietz, daughter of Herbert Wery and Ila (Lehman) Wery, was born on November 30, 1937 in Sturgeon Bay, Wisconsin and passed from this life on Tuesday, November 23, 2021 at Colonial Springs Healthcare Center in Buffalo, Missouri. She was at the time of her passing 83 years, 11 months, and 24 days of age. Betty was baptized at a young age and became a member of the Seventh-day Adventist Church. She went to Church Grade School in Tennessee and attended high school academy in Wisconsin. She also attended college in Michigan, where she also worked as a nurse’s aide in a nursing home. Betty met her husband, Jonathan Vietz, in Michigan. They were married on April 14, 1958 and had two children in Lincoln, Nebraska. While living in Nebraska she also worked at several nursing homes as a nurse’s aide. The family moved to Wisconsin in 1969 where she continued her work as a nurse’s aide and helped on the family dairy farm. They moved to Buffalo, Missouri in 1982 where they had a custom haying and combining business until their retirement. They enjoyed traveling and going to Branson to see the music shows. Betty and Jonathan had a long and happy marriage. Betty’s greatest joy in life was loving, taking care of, and spending time with her family. She always put others first. She lived in the same home near Buffalo until May 2021. She moved to Colonial Springs Healthcare Facility where she loved everyone and made many new friends that she enjoyed being with. Betty was preceded in death by her parents, Herbert Wery and Ila (Lehman) Wery; and her son Ricky John Vietz, who died in a vehicle accident in 1987. She is survived by her husband of 63 years, Jonathan Vietz, of the home; and her daughter, Pamela Hammer and husband Roger, of Buffalo, Missouri. Her precious smile and happy greeting of, “Have a good day!” and “I love you!” will be greatly missed. Graveside Services for Betty will be 1:00 p.m. Friday, November 26, 2021 at Reed Cemetery in Halfway, Missouri. To send flowers or a memorial gift to the family of Betty Jane Vietz please visit our Sympathy Store.

The family of Betty Jane Vietz (Buffalo) created this Life Tributes page to make it easy to share your memories.