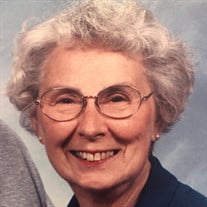 Betty Dean Wrinkle, daughter of Tom and Lillian Hall Tyre, was born March 22, 1933, near Lebanon, Missouri. She left her earthly tent on Friday, April 30, 2021, in Lebanon, Missouri, at the age of eighty-eight years. On October 7, 1952, in the Washington Christian Church, she was united in marriage to Kenneth Wrinkle, and to this union one daughter, Mary Beth, was born. She was preceded in death by her parents; and her husband of fifty-seven years, Kenneth, on January 3, 2010. Betty is survived by a daughter, Mary Beth Gilby, and her husband, Randall, of Lebanon, Missouri; two grandsons, Travis Gilby, and his wife, Kasey, of Falcon, Missouri, and Nathan Gilby, and his wife, Julie, of Lebanon, Missouri; six great-grandchildren, Gracie, Riley, Austin, Elsie, Marshall, and Abby; two brothers, Tom Tyre, and his wife, Kalyn, of Billings, Montana, and Don Tyre, and his wife, Sharon, of Grand Junction, Colorado; a sister, Barbara Thomas, of Camdenton, Missouri; a half-sister, Joyce Ross, and her husband, Charles; a special friend, Linda Seehorn, and her husband Steven, who was like a daughter to Betty, as well as a number of nieces and nephews; and a host of other relatives and many friends. She was raised near Lebanon, Missouri and attended rural schools during her elementary years. While she attended Phillipsburg High School, she worked as a waitress at the Underpass Cafe. Soon after she graduated from high school, she and Kenneth were married, and they made their home on a farm outside of Lebanon, and lovingly raised their daughter. Betty and Kenneth loved farm life, and also owned and operated the Nifty Café in downtown Lebanon for several years. Betty was always a hard worker and was employed at the Montgomery Ward Store, Bailey’s Radio Shack, and was a secretary at Southern Heights Christian Church. She then worked at Hoffman’s Greenhouse and later at Wilkinson Pharmacy for over ten years before retiring at the age of eighty-two. She was also a devoted caregiver to Kenneth during his last years. Betty was lovingly cared for by Lebanon Nursing and Rehabilitation in their Alzheimer’s Wing for the last few years. At a young age, Betty was baptized in a creek by the minister at Washington Christian Church. She loved her Savior and her church, and her faith in Jesus Christ was especially important to her. During Vacation Bible School at Southern Heights Christian Church, she would come in wearing silly hats and pulling her little red wagon to present the mission lesson. She was given the nickname of “Hattie”. She loved to sing and taught the church children to love and sing songs praising Jesus. For several years, she carried around “Betty’s Basket” before church and between services to gather funds to support one of her ministries she was passionate about – Show Me Christian Youth Home. She was an excellent cook and was well known for her yummy cinnamon rolls, yeast rolls, delicious coconut cream and cherry pies. She was also a wonderful seamstress making quilts and clothing including her daughter’s wedding dress and a quilt with each of her grandsons. She always enjoyed doing fun things with her grandsons, and they would often go to the river and get mussels, crawdads, and an occasional turtle. Then Grandma would go home and cook them up! Betty was a loving mother, grandmother, great-grandmother, sister, aunt, and was a caring neighbor and friend. Betty especially loved her Southern Heights church family. We celebrate her life and know that her family and friends will cherish the wonderful memories she created for them during her eighty-eight years. Memorials to Show-Me Christian Youth Home and the Pregnancy Support Center have been established and contributions may be made through the funeral home.

Betty Dean Wrinkle, daughter of Tom and Lillian Hall Tyre, was born March 22, 1933, near Lebanon, Missouri. She left her earthly tent on Friday, April 30, 2021, in Lebanon, Missouri, at the age of eighty-eight years. On October 7, 1952, in... View Obituary & Service Information

The family of Betty D. Wrinkle (Lebanon) created this Life Tributes page to make it easy to share your memories.