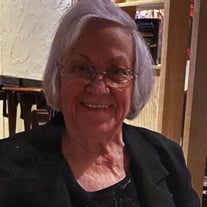 Beverly Sue Amschler, daughter of Frank and Jewell Newan Taylor, was born October 23, 1936, in Red Top, Missouri. She departed this life Monday, January 10, 2022, in Magnolia Square Nursing and Rehabilitation in Springfield, Missouri, at the age of eighty-five years, two months, and eighteen days. On January 18, 1955, she was united in marriage to John Joseph Amschler, and to this union one daughter and three sons were born. She was preceded in death by his parents; and her husband, John, on August 7, 1996. Beverly is survived by a daughter, Susie D. Steele, of Boosier City, Louisiana; three sons, John M. Amschler, and his wife, Twyla, of Springfield, Missouri, James C. Amschler, and his wife, Patricia, of Avon, Indiana, and Jason Amschler, and his wife, Stacie R., of Springfield, Missouri; twelve grandchildren; eight great-grandchildren; as well as a host of other relatives and friends. She was born and raised in the Red Top, Missouri community, just south of Buffalo, Missouri, and she graduated from Pleasant Hope High School. While working in Springfield, she met her and married her husband. He was career military so they made their home in various places across the world. They lived in France, Germany, and Newfoundland as well as in various places stateside. When John retired, the family made their home in Red Top before moving to Lebanon, in 1986. Through the years, Beverly was a devoted homemaker to her family. Beverly was raised in the Baptist faith. As a teenager she had accepted Christ as her Savior and followed the Baptist faith while loving and connecting to her Jewish roots. She loved taking care of children and caring for others. She enjoyed sewing and cooking in her spare time and was very social, never meeting a stranger. She loved her family dearly and was a good mother and grandmother. Beverly was a loving mother, grandmother, and was a caring friend. We celebrate her life and know that her family and friends will cherish the wonderful memories she made for them during her lifetime. Services for Beverly Amschler will be Thursday, Jan. 13 at 1 p.m. at Holman-Howe Funeral Home. Visitation will be held one hour prior to the service. Burial will be Calvary Cemetery. A memorial has been established to Breast Cancer Awareness Foundation and contributions may be made through the funeral home.

The family of Beverly Sue Amschler (Lebanon) created this Life Tributes page to make it easy to share your memories.