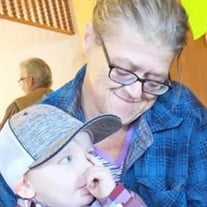 Beverly Ann Ducker, daughter of Jack Benny and Jackie Shelby Finley, was born September 19, 1963, in Lebanon, Missouri. She departed this life Saturday, January 29, 2022, in her home, near Falcon, Missouri, at the age of fifty-eight years, four months, and ten days. On January 5, 1986, she was united in marriage to Bruce E. Ducker and they shared the last thirty-six years of happiness and memories. She was preceded in death by her father; and an infant brother. Beverly is survived by her husband, Bruce, of the home, near Falcon, Missouri; her mother, Jackie Finley, of Falcon, Missouri; a brother, Donnie Finley, of Falcon, Missouri; a sister, Linda Fullington, of Hartville, Missouri; a number of nieces and nephews; a brother-in-law, Jack Ducker, and his wife, Darlene; two sisters-in-law, Connie Ducker and Karen Sutton; as well as a host of other relatives and friends. She lived her entire life in the Lynchburg, area and graduated from Plato High School. She then attended OTC Nurses Training and worked at various nursing homes in Springfield and Lebanon for several years. She also helped her mother in the operation of the J & J Café. In her spare time she enjoyed being outdoors where her favorite activities were hunting, fishing, and mushroom hunting. Beverly also made flower arrangements for all occasions and holidays. She liked going to produce auctions. She enjoyed playing with her nieces and nephews. She possessed a delightful sense of humor and loved to laugh. Her family was very important to her and she especially enjoyed her nieces and nephews. Beverly was a loving wife, daughter, sister, aunt, and was a caring friend. We celebrate her life and know that her family and friends will hold tight to the wonderful memories she made for them during her lifetime

Beverly Ann Ducker, daughter of Jack Benny and Jackie Shelby Finley, was born September 19, 1963, in Lebanon, Missouri. She departed this life Saturday, January 29, 2022, in her home, near Falcon, Missouri, at the age of fifty-eight years,... View Obituary & Service Information

The family of Beverly A. Ducker (Lebanon) created this Life Tributes page to make it easy to share your memories.