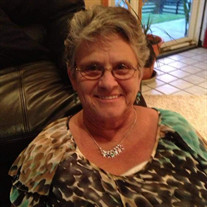 Beverly Sue Leatherman, daughter of Jessie A. and Fern Potter Tadlock, was born January 14, 1949, near Long Lane, Missouri. She departed this life Sunday, November 14, 2021, in Nixa Missouri, at the age of seventy-two years, and ten months. On July 7, 1987, she was united in marriage to Jimmie “Jim” Robert Leatherman, and they shared thirty-four years of happiness and memories. She was preceded in death by her parents; a brother, Charlie Tadlock; and two sisters, Beulah Tadlock and Barbara Griffin. Beverly is survived by her husband, Jim, of the home; four daughters, Debbie Duncan, of Muskogee, Oklahoma, Patricia Pingel, of Branson West, Missouri, Pamela Colstrom, of Liberty, Missouri, and Brandy Mason, of Springfield, Missouri; two sons, Billy Worley, of Camdenton, Missouri, and Cody Worley, of Lebanon, Missouri; eight grandchildren, fourteen great grandchildren, two brothers, James “Jim” Tadlock, of Warsaw, Missouri and Larry Tadlock, of Buffalo, Missouri; three sisters, Joan McGuire, and Shirley See, both of Lebanon, Missouri, and Virginia Sousley, of Ozark, Missouri; a number of nieces and nephews; as well as a host of other relatives and friends. Beverly was raised in the Long Lane and Lebanon areas and attended Lebanon schools. She spent the majority of her life in the Lebanon area and a number of years in Warsaw to be near Truman Lake. No matter the location, she was a devoted homemaker to her husband and family. Beverly was a member of the Church of Christ and was active in the South Five Church of Christ in Lebanon, as well as Lincoln, MO and Okeechobee, FL during the time she lived there. She became very close friends and enjoyed the company of her brothers and sisters in Christ. In her spare time she enjoyed quilting, crocheting, gardening and fishing. Beverly loved shopping and had a great passion for jewelry. She and Jim had become “snowbirds” and spent fourteen winters in Florida. She loved her family dearly and especially liked spending time with her children and grandchildren. Beverly was a loving wife, mother, grandmother, sister, aunt, and a caring neighbor and friend. We celebrate her life and know that her family and friends will hold tight to the wonderful memories she created for them during her lifetime.

Beverly Sue Leatherman, daughter of Jessie A. and Fern Potter Tadlock, was born January 14, 1949, near Long Lane, Missouri. She departed this life Sunday, November 14, 2021, in Nixa Missouri, at the age of seventy-two years, and ten months. On... View Obituary & Service Information

The family of Beverly S. Leatherman (Lebanon) created this Life Tributes page to make it easy to share your memories.

Beverly Sue Leatherman, daughter of Jessie A. and Fern Potter...