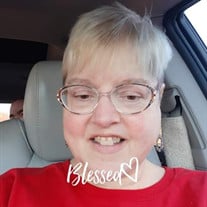 Beverly Lynn Tubbs, daughter of Richard A. and Delma Ruth Zealer Overbay, was born July 1, 1965, in Havre de Grace, Maryland. She departed this life Sunday, February 20, 2022, in Mercy Hospital, in Springfield, Missouri, at the age of fifty-six years, seven months, and twenty-one days. On May 25, 1986, she was united in marriage to Allen R. Tubbs, and to this union two sons were born. She was preceded in death by her parents. Beverly is survived by her loving husband of thirty-five years, Allen, of the home in Lebanon, Missouri; two sons, Joseph M. Tubbs, of the home, and Nicholas Tubbs, of Lebanon, Missouri; four sisters, Melissa Overbay, and Charlene Keys, both of Lebanon, Missouri, and Cynthia Dunkin, and Crystal Crispin, both of Falcon, Missouri; three brothers, Jason Adams, and his wife, Amy, of the State of Texas, Richard A. Overbay, and John L. Adams, both of Lebanon, Missouri; a number of nieces and nephews; her step-mother, Linda Overbay, of Lebanon, Missouri; as well as a host of other relatives and friends. She was raised in a military family and lived in various locations such as Germany for seven years, and Colorado for seventeen years. In 2000, she and Allen moved to Lebanon and made their home. Beverly was a devoted homemaker to her husband and sons, and also worked for Walmart for several years. She also did some babysitting at various times. Beverly had made her profession of faith in Christ and was a member of Hillcrest Baptist Church. In her younger years, she enjoyed riding and showing horses. She was an advocate for special needs children, especially with her son. She was always willing to help others and was the first to check up and help care for family members. Her family was very dear to her and she loved having time with her sons. Beverly was a loving wife, mother, sister, aunt, daughter, and was a caring friend. We celebrate her life and know that her family and friends will cherish the wonderful memories she created for them during her lifetime. A memorial service for Beverly Tubbs will be held Tuesday, February 22, 2022 at 6 PM at Holman Howe Funeral Home in Lebanon, MO with Pastor David Brown presiding. Visitation will take place an hour prior to the service. A memorial has been established and contributions may be left at Holman Howe Funeral Home.