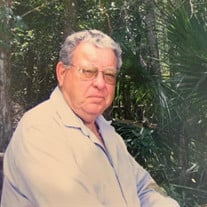 Bobbie Gene Evans, son of Floyd L. Evans and Zella (Goforth) Evans, was born September 25, 1934, at the Evans Duck Creek Farmhouse near Richland, Missouri. He passed away on Monday, April 25, 2022, in his home, in Lebanon, Missouri, at the age of eighty-seven years, and seven months. He was preceded in death by his parents; two brothers, Lerand and James Evans; a sister, Mary Andersen; and a nephew, Tracy Andersen. Bob is survived by his wife, Jeri, of the home; his children, Michael J. Evans, and his wife, Jodi, Billy Joe Stephens, and his wife, Gail, Tracie Ann (Grace) Archer, and her husband, Bobby, all of Lebanon, Missouri, Mark Evans of Portland, Oregon, Tommy Files who he considered a son, and Deborah Nagel, of the State of Oregon; eight grandchildren, Marissa and her husband, Andrew, Gregory, and his wife, Abigail, Bradley, and his wife, Alissa, Mikayla, Tyler Cole, Brady, Tyler, and Haden; five great-grandchildren, Annalynn Archer, Slate Archer, Amelia McElvaney, Oliver Archer, and Preslee Archer; two nephews, Hal Douglas Evans, and John Evans; as well as a host of other relatives and friends. Bobbie, who was called “Bob” by his family and friends, graduated from Richland High School in 1953 and farmed for two years on the family farm with his father before joining the Air Force in 1955, where he spent the next four years stationed at Neah Bay, Washington - North Bend, and Portland, Oregon. He was assigned to security as a sentry dog trainer and handler. In 1956, he started flight training and received his Private Pilot's flying license with a Flying Club at Port Angeles Airport, Washington. After his tour of duty in the Air Force, he received electrical apprenticeship training with the International Brotherhood of Electrical Workers Local 48 Electrical Union at Portland, Oregon, where he earned his Journeyman Electrician License. While working as an electrician, he continued his flight training and received the Commercial Pilot, Multi-engine Pilot, Instrument Pilot, Instructor and Instrument Instructor pilot rating and taught basic flight training at Portland-Troutdale Airport, Oregon and later trained and received his Airline Transport Pilot certificate. In 1967, he returned to Richland and worked as a Pilot for Skyways Airlines at Fort Leonard Wood, Missouri and also worked as an electrician. Bob was President and CEO for BECO (Bob Evans Co.) Electric, Inc. and had an electrical construction business at Richland and later in Lebanon, MO. In 1980, he earned the Master Electrician rating with both the City of Jefferson City and the City of Springfield, MO. In 1970, Bob became employed with the Waynesville R-6 School System as a Vocational Educational Teacher for basic electrical theory, electrical construction wiring and National Electrical Code requirements, retiring in 2000. During those 30 years, he taught many students who followed a career in electricity. In 1976, he met the love of his life, Geraldine “Jeri” Fowler and it was love at first sight, however, it took over two years before he could convince Jeri to marry him. They were married January 1, 1978, and to this union one son Michael was born. The family, Bob, Jeri, Michael, Bill Stephens, and Tracie Grace made their home on a small farm near Phillipsburg, Missouri. During the summer months, and school summer vacation, Bob kept busy doing electrical construction wiring, giving flight instructions, and flying as a corporate pilot. Over the years, he has flown as a corporate pilot for Empire Gas (Empire Airlines), Detroit Tool, and Bob Van Stavern of Lebanon, also Arkoma Basin (Horizon Ahead LLC) of Rockwall, Texas and Spindle Top Oil Co. of Dallas, Texas. Bob was a Master Mason, a 32nd degree Scottish Rite Mason and a Shriner. He was involved in Civil Air Patrol for over 60 years, both with the state of Oregon and later the state of Missouri, obtaining the grade of Lt. Colonel, and served as a mission pilot, instructor pilot and pilot evaluator (Examiner) for the Missouri Wing of Civil Air Patrol. As a Master Electrician, Bob often gave electrical safety seminars and electrical code study classes for the local area craftsmen. During his life on earth of 87 years, he set for himself many goals and received many rewards from these goals. He often told those who knew him, "The key to success is being prepared for opportunities". At an early age of 13, he set a life goal to meet with the Lord in heaven some day and at that time joined the Methodist Church of Richland. Later, with his wife, Jeri and daughter, Tracie, they were baptized and joined the First Baptist Church of Lebanon. Bob enjoyed fishing and spending time with his family and friends at their family lake house on the Lake of the Ozarks. He enjoyed crappie fishing and especially enjoyed jug fishing for catfish with his wife, children, grandchildren, and friends. He often provided fish for the Richland High School class of '53 reunion and fish fry. He was also noted for telling humorous stories. He often said, "The world needs a little more humor and laughter." Bob enjoyed the Ozarks and living the peaceful and simple life. He enjoyed helping provide for the needs of his family and was a loving and caring husband, father, grandfather, great-grandfather and a true friend to many who knew him. We will forever cherish with fond memories, all the days God gave us with Bob, as his memories and legacy continues on. Memorials may be made to the Civil Air Patrol in care of the funeral home at 320 S. Adams Ave, Lebanon, Missouri 65536.

Bobbie Gene Evans, son of Floyd L. Evans and Zella (Goforth) Evans, was born September 25, 1934, at the Evans Duck Creek Farmhouse near Richland, Missouri. He passed away on Monday, April 25, 2022, in his home, in Lebanon, Missouri, at the... View Obituary & Service Information

The family of Bobbie (Bob) Gene Evans (Lebanon) created this Life Tributes page to make it easy to share your memories.

Send flowers to the Evans family.