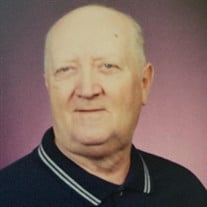 Bobbie Dale Gothard, age 81, of Bolivar passed away on Saturday, May 14, 2022. He was born outside of Fair Play, MO on March 30, 1941, to Paul Eugene and Eujean Butler Gothard. Bobbie and Linda Sue Long were united in marriage on May 29, 1965. To this union, three children were born. Bobbie managed his home farm with his mother while still in high school in Fair Play. He graduated in 1959. Bobbie was an avid hunter until quail population was depleted. He enjoyed fishing and his Saturday night neighborhood fish fry. Bobbie was a barber in Bolivar and enjoyed sharing stories with friends for many years. He had a fish farm and sold bait around the lakes in the area and helped farmers stock their ponds. Bobbie ventured into real estate buying farms and rental houses. He raised registered limousine cattle. Bobbie and Linda traveled and enjoyed staying at locations where they could enjoy views of water – lakes, rivers, oceans. Bobbie was proceeded in death by his parents. Bobbie is survived by his wife of 56 years, Linda; his three children, Tracy and Kelly Welch, Barbara Lee, and Paul and Diana Gothard all of Bolivar; his ten grandchildren, Charlene and Carmen Soto of Bolivar; Derek and Kaitlyn Welch of Carthage; Sloan Welch and fiancé Lance Teague of Halfway; Devin Welch, Kellynn Welch, and Dustin Welch of Bolivar; Lakyn and Reed Forester of Orlando, Florida;, Alexa Aldridge of Bolivar, Bud Chappell and Samantha of Springfield; and Shayd Gothard of Bolivar; four great-grandchildren Carter, Charlize, and Cerenity Soto of Bolivar and Holden Teague of Halfway; his sister Linda Dawes of Bolivar ; two brothers-in-law, Charles (Kay) Long and Tim Long; and two aunts Lulu Marie Davis of Fair Play; Irma Butler, Missouri; as well as several nieces and nephews; cousins; and friends. A private family gathering will be held at a later date. Online condolences may be made through Butler Funeral Home. To send flowers or a memorial gift to the family of Bobbie Dale Gothard please visit our Sympathy Store.

The family of Bobbie Dale Gothard (Bolivar) created this Life Tributes page to make it easy to share your memories.

Bobbie Dale Gothard, age 81, of Bolivar passed away on Saturday,...