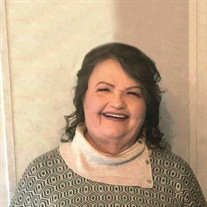 Brenda Sue Blankenship, daughter of Lark and Mavis Demelda Handley Gennings, was born February 18, 1952, in Lebanon, Missouri. She departed this life Sunday, April 24, 2022, in her home, near Eldridge, Missouri, at the age of seventy years, two months, and six days. On December 7, 1968, she was united in marriage to Donald “Don” Leroy Blankenship at Eldridge, Missouri, and to this union one son was born. She was preceded in death by her parents; her grandparents; four brothers, Raymond and Charles King and two infants; a sister, Diane Garroutte; several aunts, uncles, cousins; and a niece, Cindy Walker. Brenda is survived by her loving husband of fifty-three years, Don, of the home, near Eldridge, Missouri; a son, Randy Blankenship, of Eldridge, Missouri; three grandchildren, Dillon, Lindsey, and Brooke; six great-grandchildren, Zoei, Lemi, Nadalyn, Jaxton, Andi, and Jasper and a sister, Debbie Carroll. She was raised in the Eldridge community, and attended Lebanon R-III Schools. After she and Don were married, they made their home near Eldridge and lovingly raised their son. Brenda was a devoted homemaker to her husband and son, and also worked for the H. D. Lee Company for several years. She then worked for the Durham Company and later Voyager Marine for a number of years. The job she enjoyed the most was babysitting her grandchildren. Brenda professed her faith in Christ at the age of thirteen and was an active member of Ira Missionary Baptist Church. She was a devoted Christian and loved the Lord. In her spare time she enjoyed crocheting and loved cooking, particularly making dinners for her family. She enjoyed the quiet times with Don, having coffee on the porch and looking at the beauty God created. She cherished her family with all her heart and loved spoiling all of them. Brenda was a loving wife, mother, grandmother, great-grandmother, sister, aunt, and was a caring neighbor and friend. We celebrate her life and know that her family and friends will cherish the wonderful memories she made with them during her lifetime. A memorial has been established for Ira Church and contributions may be made through the Funeral Home.

Brenda Sue Blankenship, daughter of Lark and Mavis Demelda Handley Gennings, was born February 18, 1952, in Lebanon, Missouri. She departed this life Sunday, April 24, 2022, in her home, near Eldridge, Missouri, at the age of seventy... View Obituary & Service Information

The family of Brenda Sue Blankenship (Lebanon) created this Life Tributes page to make it easy to share your memories.