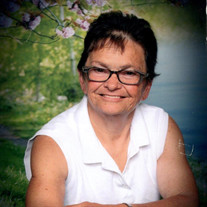 Brenda Lee Lowery, daughter of Leo Harold and Ruthie Alice Williams Shetler, was born August 17, 1959, in Houston, Missouri. She departed this life Thursday, June 16, 2022, in her home, near Lebanon, Missouri, at the age of sixty-two years, nine months, and twenty-nine days. On August 2, 1990, she was united in marriage to Wallace Lowery, and they shared thirty-one years, of love and memories. She was preceded in death by her parents; a sister, Mary Alice Bax Shetler; and a niece, Loretta Shetler. Brenda is survived by her loving husband, Wallace, of the home; a brother, Sherman Shetler, of the State of Arkansas; a sister, Norma Jean Huntley and her husband, Steve Huntley of Lebanon, Missouri; her nieces and nephews, Sam Shetler, and his wife, Danielle, Greg Shetler, and his wife, Brandy, Chris Shetler, Heather Vaughn, and her husband, James, Elizabeth Graver, and her husband, David, Mary Orleana Hill, and Toby Joe Hill; her great-nieces and great-nephews, Dade, Kyle, Colten, Michael, Kaleb, JoZee, Eddie, M.J, Peyton, Astrid, Conner, Amari, Grayson, Adaleigh, and Malachi; as well as a host of other relatives and friends. She was raised in St. Charles, Missouri, and then moved with her family to Lebanon, Missouri, when she was twelve years old. She graduated from Stoutland High School and then earned her Associates Degree in Psychology from Drury University in Fort Leonard Wood, Missouri. After she and Wallace were married, they made their home near Lebanon. She worked for Copeland Corporation, which is now Emerson Electric, for twenty-two years. Brenda was an active member of Sleeper United Methodist Church, a volunteer teacher’s aide for Lebanon Head Start, and an avid Betty Boop collector. She also was a member of the Sleeper Fire Department Auxiliary. She enjoyed watching wrestling on Friday nights and going to I-44 Speedway races. She spent much of her time at the skating rink with Wally and they even got married at the skating rink. She also was very fond of her dogs. She enjoyed spending time with her family and especially her nieces and nephews. Brenda was a loving wife, sister, aunt, great-aunt, and was a caring friend. We celebrate her life and know that her family and friends will cherish the wonderful memories she made for them during her lifetime. A memorial has been established and donations may be left at the funeral home.

Brenda Lee Lowery, daughter of Leo Harold and Ruthie Alice Williams Shetler, was born August 17, 1959, in Houston, Missouri. She departed this life Thursday, June 16, 2022, in her home, near Lebanon, Missouri, at the age of sixty-two years,... View Obituary & Service Information

The family of Brenda Lee Lowery (Lebanon) created this Life Tributes page to make it easy to share your memories.