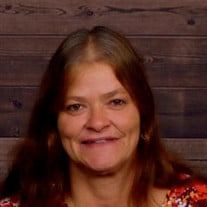 Brenda Sue Rogers, daughter of Jim and Edna Marie Leighty Odorizzi, was born October 26, 1968, in St. Louis, Missouri. She departed this life Friday, August 13, 2021, in her home, in Lebanon, Missouri, at the age of fifty-two years, nine months, and eighteen days. On February 14, 1990, she was united in marriage to Darrell L. Rogers, and to this union one daughter was born. She was preceded in death by her father; a daughter, Shannon Rogers; and a brother, Daniel Houseman. Brenda is survived by her husband, Darrell, of Lebanon, Missouri; a grandson, Austin D. Speer, of Richland, Missouri; her mother, Edna Marie Leighty, of Lebanon, Missouri; a brother, Bobby Harper, Jr., of the State of Florida; five sisters, Tammy L. Canell, Sherry Odorizzi, Eugenia Odorizzi, Rhonda Depre, and Crystal Thomas, all of Lebanon, Missouri; several nieces and nephews; as well as a host of other relatives and friends. She was born and raised in the St. Louis area and then moved with her family to Lebanon in the late 1970’s. She attended Lebanon R-III Schools. She worked for the H. D. Lee Company, Copeland Corporation, and various boat manufacturing companies. She later worked for Gaslight Manor and Lebanon North Nursing and Rehabilitation Center for a few years. She was always a devoted homemaker to her family. She loved Jesus and had established her own personal relationship with her Lord and Savior. She was always willing to help others. She liked being outdoors where her favorite activity was fishing. She enjoyed going to classic rock concerts. Her family was very dear to her and she especially enjoyed family gatherings and holidays. Brenda was a loving wife, grandmother, daughter, sister, aunt, and was a caring friend. We celebrate her life and know that her family and friends will hold tight to the wonderful memories she made for them during her lifetime. Services for Brenda Sue Rogers will be Thursday, Aug. 19, 2021 at 2 p.m. at Holman-Howe Funeral Home. A visitation will be held Thursday, Aug. 19 from 1 p.m. - 2 p.m. in the funeral home. A memorial has been established and donations may be left at the funeral home.

The family of Brenda S. Rogers (Lebanon) created this Life Tributes page to make it easy to share your memories.