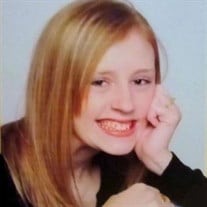 Brittaney Nicole Terry Francis, age 30 of Lebanon, Missouri, passed away Thursday, May 19, 2022. Brittaney was born November 15, 1991 in Springfield, Missouri. She was preceded in death by her grandparents, Jerry Terry and Lloyd and Bertha Chandler. Brittaney is survived by her finance, Harley Brumbaugh of Lebanon; her daughter, Cora Elizabeth Brumbaugh; her father Randy Terry and his wife, Betty of Springfield, Missouri; her mothers, Cora Terry of Lebanon and Laura Graham and her husband, James of Marshfield, Missouri; her sisters, Melissa Willough and husband, Aaron of Lebanon, Melinda Brooks of Lebanon, Marley Keeney of Lebanon, Randi Michelle Terry of Lebanon, Sara Lobato and her husband, Mike of Colorado, Christina Coy of Lebanon, Lindsay Fers of Lebanon, Destiny Graham of Lebanon; two brothers, Bary Wayne Terry and his husband, David of Bolivar, Missouri and Dane Graham and his wife, ShaiAnn of Laquey, Missouri; her paternal grandmother, Glenda Traister of Springfield; maternal grandparents, Bob and Sue Harkness of Lebanon; a good friend, Danny Joe Rogers of Springfield; many aunts, uncles, nieces, nephews, cousins and friends. Brittaney attended Lebanon Schools and in her younger years, she enjoyed showing horses and participating in pageants. In her teenage years, Brittaney liked to read and she really loved coloring. A memorial service for Brittaney Francis will be held Tuesday, May 31, 2022 at Holman-Howe Funeral Home at 6 p.m. A visitation will be held one hour prior to the service, from 5 p.m. – 6 p.m. In lieu of flowers, memorial donations may be made to the family to assist with expenses in taking Brittaney’s daughter, Cora, to medical appointments in St. Louis.

Brittaney Nicole Terry Francis, age 30 of Lebanon, Missouri, passed away Thursday, May 19, 2022. Brittaney was born November 15, 1991 in Springfield, Missouri. She was preceded in death by her grandparents, Jerry Terry and Lloyd and Bertha... View Obituary & Service Information

The family of Brittaney N. Terry Francis (Lebanon) created this Life Tributes page to make it easy to share your memories.