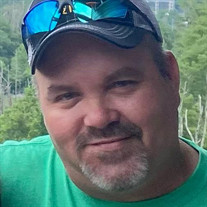 Bryan Len Baker, son of Dwight and Iona Pulley Baker, was born February 1, 1973, in Lebanon, Missouri. He departed this life Monday, August 16, 2021, in Lake Regional Hospital, in Osage Beach, Missouri, at the age of forty-eight years, six months, and fifteen days. On February 13, 1999, he was united in marriage to Donna Leann Peterson, and they shared the last twenty-two years. He was preceded in death by his parents; a grandson, Riley Gerber; and his father-in-law and mother-in-law. Bryan is survived by his wife, Donna, of the home; five children, Cole, and his girlfriend, Jaden, Derrick, and his wife, Crystal, Amy, and her husband, Joe, Sam, and his girlfriend, Vickie, and Wes, and his wife, Christy; six special grandchildren, Addison, Kirra, Ezra, J.T., Kimber, and Breken; his siblings, Debbie, and her husband, Rick, Jimmy, Dennis, Dwight Jr., D.J., Kevin, and Michelle; his step-mother, Bessie Baker of the state of Arizona; several nieces and nephews; his neighbors and good friends, Ernest and Vicky Smith; his dog, Maddie Mae; as well as a host of other relatives and friends. He was born and raised in the Lebanon area and graduated from Lebanon High School. He had worked as a welder for Generation 3 Boat Manufacturing Company in Lebanon for seventeen years. After he and Donna were married, they made their home near Lebanon. He possessed an old soul and was kind of like 48 going on 95. He was an avid hunter and liked hunting for deer, turkey, quail and rabbit. He also liked going fishing. He enjoyed watching John Wayne movies and liked playing cards with his friends. He was generous with his grandchildren, which he loved very much. Bryan was a loving husband, father, grandfather, brother, uncle, and was a caring neighbor and friend. We celebrate his life and know that he will be fondly remembered and greatly missed by all those who knew and loved him. A visitation will be held Thursday evening, Aug. 19, from 6- 8 p.m. at Holman-Howe Funeral Home in Lebanon. No other services are planned at this time.

The family of Bryan L. Baker (Lebanon) created this Life Tributes page to make it easy to share your memories.