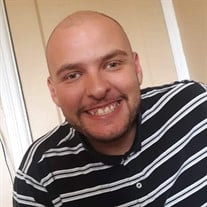 Bryan William Kerns, son of Samuel D. Kerns, Jr., and Renee Lynn Trout, was born August 27, 1990, in Bolivar, Missouri. He departed this life Wednesday, February 23, 2022, in SSM Health DePaul Hospital, in Bridgeton, Missouri, at the age of thirty-one years, five months, and twenty-seven days. He was preceded in death by his grandfathers, Edward “Butch” Dziepak, and Samuel D. Kerns, Sr.; his step-grandfather, Bernard Swartzlander; a nephew, Ashton Kerns; and his favorite cousins Harlen Ruppert and Michael Kerns. Bryan is survived by his father and step-mother, Samuel D. Kerns, Jr. and Amanda Kerns; his mother, Renee Lynn Trout; three brothers, Samuel R. Kerns, Keith Kerns and Lincoln Rogers; two sisters, Kimberly Smith, and Raven Rogers; his step-brothers, Jayden and Johnathin Nicholson; his grandmothers, Joyce Kerns and Dot Dziepak; his nieces and nephews, Cayleigh, Freya, Elaina, and Mason Kerns; as well as a host of other relatives and friends. He received his high school diploma in 2012. He was a true fighter and after being given five years to live he made it ten years. He was a fan of the New Jersey Devils and San Francisco 49ers. He enjoyed singing, wrestling, and drinking a Mountain Dew. His life revolved around his family and friends. He had a good sense of humor, liked to laugh, and loved smiling which basically defined him. In 1999, Bryan accepted Jesus as his Lord and Savior and was baptized. Bryan was a loving son, grandson, brother, uncle, and was a good friend. We celebrate his life and know that his family and friends will hold tight to the wonderful memories they have of him.

The family of Bryan W. Kerns (Lebanon) created this Life Tributes page to make it easy to share your memories.