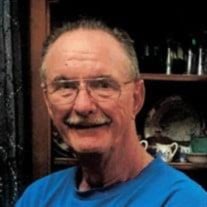 Burke Stafford Holt, son of Paul Holt and Josephine (Stafford) Holt, entered this life on December 15, 1945 in Independence, Missouri and was welcomed into Heaven on Wednesday, November 3, 2021. He was 75 years, 10 months and 19 days of age. Burke made a profession of faith in Christ at the age of 8-years-old, and was baptized by his father, Paul, in Wellston, North Dakota. He served his Lord and Savior devotedly throughout his life. Burke and Mary enjoyed working with the youth and spent many years as church youth leaders. He became an Elder in June of 1991. He and Mary attended the Springfield Restoration Church as much as their health would allow. Burke loved all of his church family and appreciated their continued love and support over the years. Burke grew up in the southwest Missouri area and graduated from Skyline High School in 1963. He married Mary Jane Watkinson on December 17, 1964. He enlisted and served in the United States Navy from 1964-1968. During this time, they were stationed in San Diego, California, but returned to Independence, Missouri as soon as possible. From that point Burke and Mary were inseparable. Burke was always by his wife’s side. Even during his illness and right up to his passing. The 57 years of marriage they spent together went by in a blink of the eye. They raised twin sons, Tommy Dale Holt and Johnny Dale Holt. They were blessed with five grandsons, Devin, Shane, Brennan, Jeramy, Derrick; and seven great-grandchildren, Sky, Gaia, Celeste, Nora, Camille, Everly, and Hayden. Burke exhibited a giving heart and a serving spirit. He took pride in serving on the Board of Directors for the Village of Preston. He was instrumental in implementing the new water tower, and he also served on the Preston Fire Protection Board. A favorite pastime he loved was traveling with Mary by his side. Upon retirement, they were fortunate enough to vacation and travel in their RV camper on the wide-open roads with the anticipation of new adventures around every corner. Burke enjoyed being in the kitchen any time. Taking charge of the holiday family gatherings was something he looked forward to every year. Especially when he found a new recipe he wanted to try-out on everyone; primarily desserts. All of his family was important to him, but his grandchildren and great-grandchildren most of all. Burke and Mary were constant supporters of their activities and made it a priority to drive to wherever any of the grandkids were playing and loudly “cheer” them on! Throughout his life, Burke was an active, dedicated, sports enthusiast, not to mention being a lifetime Kansas City Chiefs fan! Another hobby of his was gardening. He was always so pleased when he had an overabundance of vegetables to share with family, friends, and neighbors. Burke was a carpenter by trade. He worked hard over the years at many different jobs honing his skills. Those who worked with Burke appreciated his knowledge and expertise. He gained much deserved respect from his coworkers and employers. He retired from his final employer, John Knox Retirement Village in 2014, after 25+ years of service. He and Mary then moved back to the Preston area to be closer to family. He was able to utilize his carpentry skills once again to build their retirement home, where they found enjoyment every day. Burke was a loving husband, father, grandfather, great-grandfather, brother, and uncle, and was a caring neighbor and friend. He is preceded in death by his parents, Paul and Josephine; two sisters, June and Wilma; and three brothers, Paul, Cecil, and Joe Ray. He is survived by his wife, Mary; two sons, Johnny Dale Holt of Preston, Missouri; and Tommy Dale Holt and wife Taria, of Preston, Missouri; five grandchildren, Devin Holt and wife Natalie, of Bolivar, Missouri, Shane Holt and wife Kylie, of Jacksonville, Florida, Brennan holt and fiancée Kaylee Damitz of Preston, Missouri, Jeramy Holt and wife Lisset of Camdenton, Missouri, and Derrick Holt of Springfield, Missouri; seven great-grandchildren, Hayden, Everly, Camille, Nora, Celeste, Gaia, and Sky; two sisters, Patricia Feugate of Independence, Missouri, Wanda and husband Larry Sheppard of Appleton City, Missouri; brothers, Jimmie King and wife Jean, of Fort Riley, Kansas, and Knox “Hokey” Holt of Wisconsin Dells, Wisconsin; and along with several nieces, nephews, other relatives, and countless friends. We celebrate Burke’s life and his accomplishments and know that his family and friends will cherish the wonderful memories he created for them during his lifetime. So, whether you had known Burke a short time, or over many years, you were instantly aware of his love of the Gospel. His presence was a force, and he could always be counted on in a time of need. Our lives have all been impacted in some way because of him. We were fortunate enough to have him for a while. He was yours, Heavenly Father, before he was ours and we realize his mansion was ready; it is only difficult because our hearts were not. Memorial Services will be held on Wednesday, November 17, 2021 at 1:00 p.m. at the Cantlon-Otterness & Viets Funeral Home in Urbana, Missouri. Visitation will be Wednesday, November 17, 2021 from 12:00 - 1:00 p.m. Cremation rites are being accorded by Cantlon-Otterness & Viets Funeral Home in Buffalo, Missouri. To send flowers or a memorial gift to the family of Burke Stafford Holt please visit our Sympathy Store.

Burke Stafford Holt, son of Paul Holt and Josephine (Stafford) Holt, entered this life on December 15, 1945 in Independence, Missouri and was welcomed into Heaven on Wednesday, November 3, 2021. He was 75 years, 10 months and 19 days of age. Burke... View Obituary & Service Information

The family of Burke Stafford Holt (Urbana) created this Life Tributes page to make it easy to share your memories.