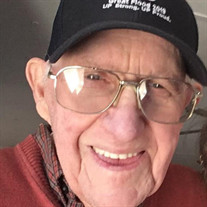 Carl Dean Griffin, son of Vester William and Lorene Garrett Griffin, was born April 13, 1943, in Laclede County, Missouri. He departed this life Monday, October 11, 2021, in Van Buren, Arkansas, at the age of seventy-eight years, five months, and twenty-eight days. He was united in marriage to Teresa Keenan Griffin and they shared the last several years of happiness and memories. His parents preceded him in death; two of his brothers, Junior Griffin and Wayne Griffin; his sisters, Lola Grace Myers and Deloris Partain; and an infant granddaughter, Melody Grace Pepper. Carl is survived by his wife, Teresa, of the home; five daughters, Cindy Evans (Brian) and Becky Holton (Mark), both of Lebanon, Missouri, Cheri Heltzel (Justin), of Conway, Missouri, Traci Barrett, of Brumley, Missouri, and Angela Henry (James), of Sunrise Beach, Missouri; four sons, David Griffin, Sergio Licea, Jr. (Belinda), Shaun Pepper (Billiee), all of Lebanon, Missouri, and Ryan D. Pepper (Ashlee), of Van Buren, Arkansas; twenty-four grandchildren and thirteen great-grandchildren; a brother, Ed Griffin (Sue), of Lebanon, Missouri; his mother-in-law, Goldie Keenan of Marshfield, Missouri; and a brother-in-law, Dale Keenan (Marsha) of Marshfield, Missouri; several nieces and nephews; and his best bud, of 72-plus years, Leonard Breedlove (Darlene) of Lebanon, Missouri. He was born and raised in the Lebanon and Russ, Missouri area and attended Lebanon R-III Schools. He worked most of his life in the excavation business with his father and later started his own business. He drove a truck over the road when times were slow. He also worked as a dump truck supervisor with one of the companies helping to rebuild the levies in Louisiana after Hurricane Katrina. In February he and Teresa became snowbirds and moved to Van Buren, Arkansas, traveling frequently between there and their home in Lebanon, Missouri. Traveling and visiting the Civil War battlefields was something he enjoyed. Listening to Bluegrass and Southern gospel music at Silver Dollar City was something he enjoyed as well. But when it came to listening to country music, he got the most enjoyment listening to Ryan Pepper picking lead guitar. Carl loved good home cooking and bragged about Teresa being such a great cook, but he would not pass up a chance to eat with his buddy, Skinny at an Oriental buffet! Two things Carl got the most enjoyment from was seeing his grandchildren and working with his backhoe. Carl was a loving husband, father, grandfather, great-grandfather, brother, uncle, and a dear, caring friend. We celebrate his life and know that he will be fondly remembered and greatly missed by all those who knew and loved him. Graveside services For Carl Dean Griffin, will be held at 1:00 P.M., Saturday, October 16, 2021 at the Lebanon Cemetery in Lebanon, Missouri under the direction of the Holman-Howe Funeral Home of Lebanon, Missouri with Rev. David Douglas officiating.

The family of Carl D. Griffin (Lebanon) created this Life Tributes page to make it easy to share your memories.