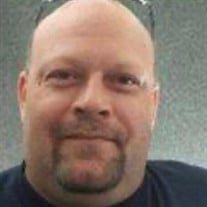 Carl Wayne Marcum, son of Ronnie and Shirley Marcum Teubner, was born February 3, 1970, in Orlando, Florida. He departed this life Friday, January 21, 2022, in Lake Regional Hospital, in Osage Beach, Missouri, at the age of fifty-one years, eleven months, and eighteen days. He was preceded in death by his sister, Shirley Phillips; and an uncle, Lester Marcum. Carl is survived by two daughters, Whitney Marcum, and Makayla Marcum, both of Buffalo, Missouri; six grandchildren, Wyatt, Willa-Grace, Waylynn, Tenlei, Ryker, and Easton; his parents, Ronnie and Shirley Teubner, of Lebanon, Missouri; two sisters, Tina Phillips, of Joplin, Missouri, and Melissa Phillips, of Columbia, Missouri; two aunts, Pat Miller, and Helen Jones; three uncles, Terry Marcum, Delmar Marcum, and Wayne Marcum; several nieces and nephews; as well as a host of other relatives and friends. He lived most of his life in the Lebanon area and worked at the Stave Mill, Tracker Marine and Copeland Industries. For the last few years, he had been employed as a handyman for Dennis Elmore. On April 21, 2019, Carl was baptized at the West Side Church of God. He particularly liked being outdoors where his favorite activities were fishing, camping, and floating. He really enjoyed playing softball and had played on several local teams through the years. He had a happy disposition, a good sense of humor, and never met a stranger. His family was very important to him and he especially enjoyed his grandchildren. Carl was a loving father, grandfather, son, brother, uncle, nephew, and was a caring friend. We celebrate his life and know that his family will hold tight to the wonderful memories he made for them during his lifetime. Cecil Peppers will be officiating the funeral service. A memorial has been established and contributions may be made through the funeral home.

The family of Carl W. Marcum (Lebanon) created this Life Tributes page to make it easy to share your memories.