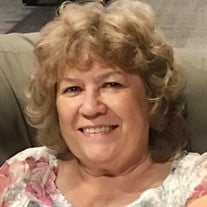 Carol Deborah Parrott, daughter of John and Edith Franks Waterman, was born February 14, 1950, in Decatur, Arkansas. She departed this life Sunday, August 15, 2021, at Lake Regional Hospital in Osage Beach, Missouri, at the age of seventy-one years, six months, and one day. On July 21, 1967, she was united in marriage to Claud Ira Parrott, and to this union three daughters were born. She was preceded in death by her parents; one brother; and two sisters. Carol is survived by her husband, Ira, of the home; three daughters, Natalie Gregory, and her husband, Daniel, Melissa Harrill, and her husband, Chuck, and Hyda Vote, and her husband, Brad; ten grandchildren, Sydney, Gabriel, and Hope Gregory, Kaleb, Isaac, Abbi, Savannah, and Scarlett Harrill, Mariah DeCarlo, and her husband, Jason, and Paige Vote; four brothers and three sisters; several nieces and nephews; as well as a host of additional relatives and friends. She lived with her family in Michigan and Iowa before the family settled in Missouri when Carol was a young girl. She attended Lebanon R-III Schools and graduated from Lebanon High School. After she and Ira were married, they made their home in Lebanon and lovingly raised their daughters. Carol was a devoted homemaker to her husband and family and also worked in banking for several years. She owned and operated Victorian Parrott Gift Baskets. Carol was a member of Highland Park Church of God in Lebanon for thirty years. She was a very generous person who taught kindness and possessed a giving and generous heart. She was a great cook and enjoyed serving people with her meals. She also liked playing cards and board games with her children, grandchildren and friends. She loved her family dearly and especially enjoyed having time with them. Carol was a loving wife, mother, grandmother, sister, aunt, and was a caring friend. We celebrate her life and know that her family and friends will cherish the wonderful memories she created with them during her lifetime. Services for Mrs. Parrott will be Wednesday, Aug. 18 at 6 p.m. at Heritage Baptist Church in Lebanon. A visitation will be held in the church from 5 - 6 p.m. A private burial will be held at a later date. A memorial has been established and donations may be left at the funeral home.

The family of Carol D. Parrott (Lebanon) created this Life Tributes page to make it easy to share your memories.