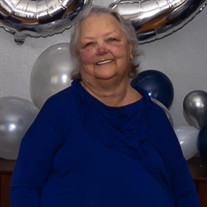 Not sure what to send?

On January 11, 2022 Catherine Louise (Jones) King went skipping down the path to the Father’s house. Upon arrival she was greeted by the love of her life, Joe Bob King. Also, her parents, Harry “Digger “and Louise Krudwig Jones and sisters Davidann O’Dell and Rebecca Ridgway. She left behind to continue the work of doing unto others; her only daughter, Tashia Starnes (Steve Weller- Fiancée) of Camdenton, Missouri; her extended children Jamie Gennetten, Samantha Adkins of Ohio and Peter Olson of Minnesota; her dearly loved grandchildren, Kordell Starnes (Destinie Baker, fiancé) and Alexis Starnes (Trent Hemphill, fiancée) all of Lebanon, Missouri She also has the most adorable great-grandson, Moxley Hemphill of Lebanon; and one sister, Freida Pekarek of Springfield, Missouri. After her grandparents, Fred and Lexie Krudwig sold the farm and moved to town she would go help clean house on Saturday morning. Every week her grandfather would say, “Cathy I’m going to tell you something important: If you see something that needs doing, just get up and go do it. Do you understand?” She took this to heart and tried to live up to his expectations. Going thru life “doing". . She was an adult Girl Scout for 14 years, mostly as a teen leader and trainer. Also participating in and training for various product sales. She was privileged to have the chance to work on a committee for council wide leader recognition and appreciations. Her very first job was as a “soda fountain jerk” at Joe Knights, starting at the age of 11! After graduation she worked for a short time in Springfield at Zenith. During this time she married Jimmy Gennetten. They moved to Colorado and had one daughter. At some point she realized Jimmy wasn’t “the man” for her and moved home to Lebanon and got a job as a day custodian at Maplecrest School. She worked there eight years and then Boswell School for two years. It was during this time at Maplecrest that she married Joe Bob King. In 1989 she decided to take a less physical job as a cook. "Yeah, didn’t think that through,” she mentioned, but she enjoyed being in the kitchen. She worked five years at Lebanon Junior High and twelve years at Maplecrest School. She enjoyed making things for the teacher's bulletin boards. In 1995 she was blessed beyond measure with the first grandchild, Kordell. It didn’t take long to figure out she wasn’t making enough to spoil him and took a part time job at McDonald's. She enjoyed working with the teenagers and loved every minute of her time there. By the time her granddaughter, Alexis was eight, she finally retired and dedicated her time to being NaNa! Spending her time playing with and watching them grow to be amazing, talented hard-working adults. And then being blessed with a great-grandson, Moxley. The last time there were four generations was 1950. Little Moxley brought much happiness to her life. Cathy became interested in Samaritan’s Purse program, Operation Christmas Child. She enjoyed helping promote and pack shoe boxes. One year she filled 150 boxes herself. After moving to Lake of the Ozarks, she started visiting the Osage Beach Senior Center and many new friendships were formed. Gratefully remembering; Mary Gaston, Dee Bradford and Kevin Mullins. They participated in many fun activities, including planning and executing numerous fund raisers. In which she helped raising money by making lots of crafts and sewed things for them to sell n the country store. During the pandemic, she made and gave away over 1100 masks. She loved the opportunity to bake a cake and would donate cakes to Our Lady of the Lake fish fry. Although it was against the rules she would sneak in a yummy confection for birthdays! Bahahaha! The Osage Beach Senior Center is owned by Hope Lutheran Church which has a swaddling clothes program. She had enjoyed sewing since her mother taught her how at age five! When the budget got tight and School of the Osage couldn’t afford new flags, she worked with the teacher to make them. After a few years the band parents took on the task. Most of her life she attended St. Francis De Sales Catholic Church in Lebanon. She received all the sacraments there. She completed grade school at St. Francis. Cathy graduated from Lebanon High School in 1971. As an adult she was active in many things such as choir, teaching, planning liturgies, decorations… Cathy was known by her family and friends as always giving to others, laughter and her wittiness. She will be greatly missed. Her only child will miss her mother's harmonized church songs, and eating nasty chicken gizzard/livers and wine every Friday night with her best friend Liz Klages of 40 plus years. Pulling her daughter in a little red wagon to go to the local laundry mat. Walking everywhere, but always explained how far a block was, when it seemed like a mile. Living in poverty never seemed as one. She always had a great attitude and made things fun. She was always there for her daughter and grandkids. Per Cathy’s request, her earthly body will be cremated as she said that it was her last chance for a smokin’ hot bod! In lieu of flowers the family suggests a donation to the Calvary Catholic Cemetery or the Osage Beach Senior Center.

On January 11, 2022 Catherine Louise (Jones) King went skipping down the path to the Father&#8217;s house. Upon arrival she was greeted by the love of her life, Joe Bob King. Also, her parents, Harry &#8220;Digger &#8220;and Louise Krudwig... View Obituary & Service Information