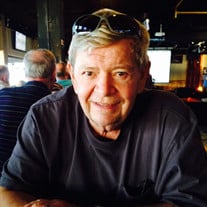 Charles Efton Hightower, son of Clifford and Julia McNealey Hightower, was born August 21, 1938, near Grovespring, Missouri. He departed this life Sunday, February 13, 2022, in his home, in Lebanon, Missouri, at the age of eighty-three years, five months, and twenty-three days. On March 9, 1963, he was united in marriage to Diane Thompson and to this union one daughter and one son were born. They shared forty-seven years of happiness and memories before Diane’s passing on October 23, 2010. On November 28, 2013, he married Carol Ann Middleton and they shared the last eight years. He was also preceded in death by his parents; and a sister, Ruby Mackie. Charles is survived by his loving wife, Carol, of the home, in Lebanon, Missouri; a daughter, Julie Hightower Jones, and her husband, David, of Lebanon, Missouri; a son, C.E. Hightower, and his wife, Debbie, of Springfield, Missouri; a step-daughter, Michelle Parsons, and her husband, Rob, of Bolivar, Missouri; four grandchildren, Dr. Michelle Helton, and her husband, Jon, of Macks Creek, Missouri, McKenna Mulhall, and her husband, Zach, of Kansas City, Missouri, Connor Hicks, and his wife, Emily, of Lebanon, Missouri, and Casen Hightower, of Tulsa, Oklahoma; two sisters, Faye Neasby, of Lebanon, Missouri, and Patty Crain, of Springfield, Missouri; his sister in-law, Sue Griffith, of Lebanon, Missouri; several nieces and nephews; as well as a host of other relatives and friends. He was raised in the Grovespring area and graduated from Hartville High School. After he and Diane were married, they made their home on their horse farm and lovingly raised their children. Charles operated Freedom Rent-A-Car and worked with Diane in International Tours for a number of years. He also owned and operated several other successful businesses through the years. Charles had a love for horses and was a member of the Missouri Fox Trotters Breeders Association, the Tennessee Walking Horse Breeders Association, was inducted into the Missouri Fox Trotters Hall of Fame, and was a charter member of the Laclede County Saddle Club. He loved farming and spending time with his horses and working with his tractor. Charles and Carol had made their home in Lebanon for the last several years. Charles had made his profession of faith in Christ and was a longtime member of First Baptist Church in Lebanon. Being on the farm and raising his horses were very important to Charles. He loved his family and was proud of each and every one of them and their accomplishments. He enjoyed his life to the fullest and the love of his horses continued throughout his life. Services For Charles Efton Hightower will be held at 11:00 A.M., Wednesday, February 16, 2022 at the Holman-Howe Funeral Home in Lebanon, Missouri, with Dr. Wendell Sapp and Dr. Timothy Howe officiating. Burial will be in Mount Rose Memorial Park in Lebanon, Missouri. Visitation will be held from 10:00 A.M. – 11:00 A.M., Wednesday, February 16, 2022 at the Holman-Howe Funeral Home in Lebanon, Missouri. A memorial to Integrity Hospice has been established and contributions may be made through the funeral home.

Charles Efton Hightower, son of Clifford and Julia McNealey Hightower, was born August 21, 1938, near Grovespring, Missouri. He departed this life Sunday, February 13, 2022, in his home, in Lebanon, Missouri, at the age of eighty-three years,... View Obituary & Service Information

The family of Charles E. Hightower (Lebanon) created this Life Tributes page to make it easy to share your memories.