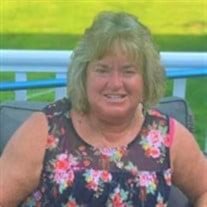 Cheryl Kay Mincks, 60, of Bolivar, Missouri, passed away on January 24, 2022. She was born to parents Ralph and Alma Booth, on April 17, 1961 in Wishart, Missouri. She graduated from Marion C. Early High School in 1979. Cheryl met the love of her life, Billy Mincks, in 1977. They were married on December 15, 1978 in Wishart, Missouri at Enon Baptist Church. Together they raised two sons: Eric and Steven Mincks. Cheryl is survived by her father, Ralph Booth and life partner Goldena; her husband, Billy Mincks; two sons, Eric Mincks, Steven Mincks and wife Heather; and two grandchildren, Kayden and Hailey. Referred to as "Nana", her life was her grandbabies. She will be deeply missed by her grandkids and a host of nieces, nephews, cousins and friends that were all dear to her heart. She was preceded in death by her mother, Alma Booth and her brothers, Richard and Mark Booth. Cheryl enjoyed spending time with her family and grandchildren. She was a devoted mother and grandmother, who gave her life to her family. She was happiest when spending time with her two grandchildren. She will be remembered most for the love she selflessly gave to her family, her loving nature, and her occasional, endearing stubbornness. Though Cheryl’s health was failing for years, few people knew the extent to which she struggled. Her joy for life and strong-willed spirit kept her pushing through the pain. It would be wrong to say Cheryl lost her battle because she never stopped fighting. No matter how sick she was, she was always determined. When anyone else would have broken, Cheryl stayed strong. Through her, we know what resilience and perseverance truly look like. There was no quit in Cheryl. Just because she is no longer here, it doesn’t mean she lost her fight. She finished well. She lived a life of grace. Every person that knew her was witness to the transformative power of Jesus Christ in her. She lived a servant’s life and modeled a servant’s heart. She loved on people with hugs, kisses and smiles. She pointed them all to Jesus. She laughed and cried, supported and encouraged and prayed for all of us. She truly loved the way Christ loves. For some, she was the closest example of Christ’s unconditional love for us all. You ran the race set out before you. You are now resting in the arms of our loving Father… You finished well. You will be greatly missed by all of us. Love you to the moon and back! Services for Cheryl will be Monday, January 31, 2022 at the Butler Funeral Home at 2:00 P.M. Visitation will be held one hour prior to the time of the service. To send flowers or a memorial gift to the family of Cheryl Kay Mincks please visit our Sympathy Store.

Cheryl Kay Mincks, 60, of Bolivar, Missouri, passed away on January 24, 2022. She was born to parents Ralph and Alma Booth, on April 17, 1961 in Wishart, Missouri. She graduated from Marion C. Early High School in 1979. Cheryl met the love... View Obituary & Service Information

The family of Cheryl Kay Mincks (Bolivar) created this Life Tributes page to make it easy to share your memories.

Cheryl Kay Mincks, 60, of Bolivar, Missouri, passed away on January...