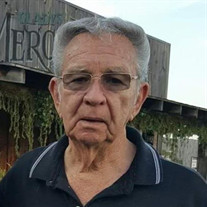 Clyde Croswell Fenwick, Jr., son of Clyde Croswell and Eva Rose Miller Fenwick, was born July 9, 1933, in Whittier, California. He departed this life Saturday, October 23, 2021, in his home, in Lebanon, Missouri, at the age of eighty-eight years, three months, and fourteen days. He is preceded in death by his parents; and his first wife, Reba Moore Fenwick. On September 28, 1969, he was united in marriage to Patricia D. Winkler. Clyde is survived by his loving wife of fifty-two years, Patricia, of the home; two daughters, Cathy Wood, and her husband, Roger, of Lebanon, Missouri, and Brandy Clinton, and her husband, Kevin, of Buena Park, California; three sons, Clyde Fenwick III, and his wife, Virginia, Charles Fenwick, all of Springfield, Missouri, and Creg Fenwick, and his wife, Laura, of Placentia, California; ten grandchildren, Becky, Cory, Clayton, Chad, Allison, Heather, Dean, Daniel, Marshall, and McKenna; eleven great-grandchildren, Michael, Brianna, Amberly, Kyle, Owen, Hallie, Hunter, Issac, Claire, Luciana, and Brookson; a sister, Roberta Oelkers, of Washington State; niece and nephews, cousins and friends. He was born and raised in Whittier, California, and graduated from high school there. He then served his country faithfully in the United States Navy and Army. He became a truck driver where he worked for fifty-six years. He retired with a perfect driving record with no chargeable accidents. In 1991, he and Patricia moved to Missouri and made their home in Lebanon. Every Thursday evening he could be found at Lebanon Liquidations Auctions with his wife and dog, Max. He enjoyed watching and following the auto races. He had a great sense of humor and loved to laugh. His family was very important to him and he especially enjoyed having time with his grandchildren and great-grandchildren. Clyde was a loving husband, father, grandfather, great-grandfather, cousin, and was a caring friend. He was one of a kind. We celebrate his life and know that his family and friends will hold tight to the wonderful memories he made for them during his eighty-eight years. Funeral services will be Tuesday, Nov. 2 at 6 p.m. in Holman-Howe Funeral Home of Lebanon. A visitation will follow. A memorial has been established to The Alzheimer's Association.

The family of Clyde C. Fenwick Jr. (Lebanon) created this Life Tributes page to make it easy to share your memories.