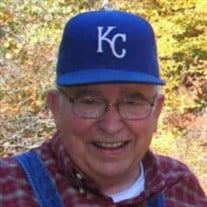 Clyde Anthony Taylor, 77, Bolivar, MO, passed away, Monday, March 7, 2022. He was born in Coffeyville, KS on April 14, 1944, to Clyde Frank and Winifred Nadene (Geddes) Taylor. He married the love of his life Patricia “Patsy” Allen on July 20, 1963, and had one daughter, Rebecca “Becky”. Clyde went to work for the Missouri Pacific Railroad in 1966, which later became Union Pacific Railroad. He worked in various towns in Kansas, Missouri, Arkansas, Texas, Oklahoma, and Nebraska; held positions as Agent Telegrapher, Dispatcher, Assistant Chief Dispatcher, Trainmaster and finally Corridor Manager. He was also the Developer of “Cedar Junction Estates” sub-division in DeSoto, KS. He had a passion for restoring and selling old cars. Clyde was known to many as Coach, as he coached girls’ basketball and softball for many years. He was also quite the athlete in his youth, playing baseball, basketball, football and taking the Kansas State Championship title in tennis. Clyde spent his retirement days doing lots of fishing and enjoyed sharing his catch with friends and family. Clyde is preceded in death by his parents and nephew Gene Ray Taylor. He is survived by his wife, Patsy; daughter, Becky (Kurt) Lading; brothers, Robert (Tina) Taylor and John (Judy) Taylor; sister-in-law, Rose Marie (Daniel) Woollard; grandchildren, Tana Choate and Michael Lading; great grandchildren, Gracelyn and Melanie Choate, and Charlie Lading; nieces, Dawn, Kelli and Jessica; nephews, Ronald, Shane and Ryan; and many other family and friends. Visitation for Clyde will be held 12:00 Noon - 2:00 PM Saturday, March 12, 2022 at the Butler Funeral Home in Bolivar. Burial will immediately follow visitation in the Greenwood Cemetery. Memorial contributions may be made to The American Heart Associating. To send flowers or a memorial gift to the family of Clyde Taylor please visit our Sympathy Store.

The family of Clyde Anthony Taylor (Bolivar) created this Life Tributes page to make it easy to share your memories.