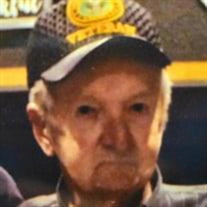 Cody Gene Jones, of Louisburg, Missouri (formerly of Monett, MO) passed away on Wednesday, October 27, 2021 at Citizens Memorial Hospital in Bolivar, MO with family by his side. At the time of his passing he was 77. Cody was born in Hurley, Missouri on December 28, 1943, to the late Cosby & Fern Jones and he graduated from Hurley High School. After high school he was drafted into the United States Army. He fought in the Vietnam War as an 88M, motor transport operator. He was a commander of the American Legion and a member of the VFW. He retired from Kay Concrete as a driver and mechanic. Cody was a man that called it like he saw it. He was known for his hard work, loyalty, and dedication to Veterans. The world will never meet another ‘Cody Jones’ and will forever be changed with his passing. He is survived by one daughter, Jodie and husband William Carlisle of Louisburg, Missouri; one son, William and wife Bobbi Jones of McCook, Nebraska; seven grandchildren, Dakota Carlisle, Trevor and wife Kristen Russell, all of Louisburg, Missouri, William, Sophia and Rachell of McCook, Nebraska, Preston and Emily Jones of Denver, Colorado, and Kaitlyn Carlisle of Bolivar, Missouri; one great-grandson, Lane Lake of Bolivar, Missouri; two sisters, Betty and the late Melvin Moss and Tammy and Steve Humphrey, all of Monnett, Missouri; and one very loyal longtime companion, Janice Smith of Mount Vernon, Missouri. Graveside Services will be held on Friday, November 5, 2021 at 11:00 am in Hood (Blackjack) Cemetery in Hurley, MO with Larry Rickman officiating. Cremation rites are being accorded by Cantlon-Otterness & Viets Funeral Home of Buffalo, MO. In lieu of flowers please send donations to your local VFW or American Legion in honor of Cody Jones and his service to the military and the Vietnam War. To send flowers or a memorial gift to the family of Cody Gene Jones please visit our Sympathy Store.

Cody Gene Jones, of Louisburg, Missouri (formerly of Monett, MO) passed away on Wednesday, October 27, 2021 at Citizens Memorial Hospital in Bolivar, MO with family by his side. At the time of his passing he was 77. Cody was born in Hurley,... View Obituary & Service Information

The family of Cody Gene Jones (Buffalo) created this Life Tributes page to make it easy to share your memories.