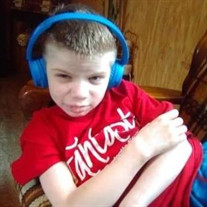 Conner Joel Crispin, son of Crystal Crispin and Cindy Dunkin, was born October 17, 2009, in St. Louis, Missouri. He departed this life Thursday, April 28, 2022, in Mercy Hospital, in Lebanon, Missouri, at the age of twelve years, six months, and eleven days, surrounded by family. He was preceded in death by a grandfather, Richard Overbay; his grandmother, Ruth Overbay, three great-grandmothers, Elsie Overbay, Sharon Jennings, and Elizabeth Harkness, two great grandfathers, Richard Crispin and Bobby Harkness; and aunts, Beverly Tubbs and Lea Macklin. Conner is survived by his mothers, Crystal Crispin and Cindy Dunkin, of the home, in Falcon, Missouri; three brothers, Caleb Crispin, Coda Crispin, and Colton Crispin, all of Falcon, Missouri, three sisters, Cheyanne Crispin, of Falcon, Missouri, Asha Twitchell, and Ariana Twitchell, both of Lebanon, Missouri; his grandparents, Terry and Raymond Eggleston, of Falcon, Missouri, Joe and Linda Harkness, and Linda Overbay, all of Lebanon, Missouri; several aunts, uncles, and cousins; as well as a host of friends. He lived his entire life in the Falcon community and was being home schooled by his mothers and grandmother. He made an amazing impact on those around him and touched many lives. He loved music and everything about music. He liked Chap Stick and enjoyed playing on his tablet and with his siblings. He brought joy into the home and taught many people how to understand and be around a special needs child. Conner was a loving son, brother, grandson, nephew, and was a caring friend. We know that he will be fondly remembered and greatly missed by all those who knew and loved him. A memorial has been established and donations may be left at the funeral home.

The family of Conner Joel Crispin (Lebanon) created this Life Tributes page to make it easy to share your memories.