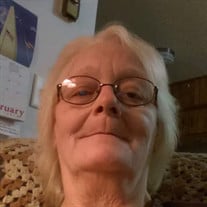 Services for Connie Sue (Napier) Pogue are set for Friday, August 20, 2021, with visitation to begin at 1:00 PM followed by funeral service at 2:00 PM, at HHFH in Seymour. Connie will be cremated and laid to rest with her beloved Jimmy at a later date. Connie Pogue, beloved mom, grandma, sister, aunt and friend, peacefully departed this life while surrounded by loved ones in her son’s Seymour home Sunday evening, August 15, 2021, at the age of 65. One of three children, she was born Connie Sue Napier on November 29th, 1955, in Aurora, Missouri, to Olin and Daisy (Faye) Napier. She attended Aurora schools and was a graduate of the Aurora High School Class of 1974. Connie married Jimmy Dale Pogue on August 4, 1993, and together, along with her son Jermey, they spent 25 happy years until his passing in February of 2020. Connie was a hard worker. Her first job was at Tyson in Monett, working in the poultry processing plant while Jermey was an infant. She was a seamstress for HD Lee in Seymour for 19 years until the factory closed. She worked at Come Play Toys in Marshfield for a time, and later worked for ten years as a cook at Glenwood Nursing in Seymour. She retired from Casey’s General Stores in 2017 after 5 years of faithful service. She loved to quilt and needlepoint and was a huge Mickey Gilly fan, but professional wrestling was her passion. From the early 1980s, she watched religiously as wrestling evolved into the mega sport it is today – she never missed a match. In her spare time, she really enjoyed watching HGTV, the Hallmark Channel, and Wheel of Fortune. Connie was preceded in death by her parents; brother Clarence Napier; husband Jimmy; and her son’s fiancé Stacy Walter. She leaves behind her son Jermey Napier and grandsons, Olin and Ricky Napier – all of Seymour; her sister Jody Ahlert and husband Michael, of St. Charles, Missouri; sister-in-law Linda Totten and husband Jerry of Rogersville, Missouri; nieces, Jennifer Schnieder and husband Matt, of St. Charles, Missouri, Amanda Gifford, Andrea Walton - both of Springfield, Missouri, Melinda Barnwell and husband Sean of Ozark, Missouri, and Angie Corum and husband Matt of Seymour; nephews, Joe Napier of Neosho, Missouri, Christopher Napier of San Diego, California, Micheal Totten and wife Melanie of Marshfield, Missouri, William Pogue and wife Jennifer of Seymour; sister-in-law Frances Davis and her husband Ralph also of Seymour; and a host of other family and friends.

Services for Connie Sue (Napier) Pogue are set for Friday, August 20, 2021, with visitation to begin at 1:00 PM followed by funeral service at 2:00 PM, at HHFH in Seymour. Connie will be cremated and laid to rest with her beloved Jimmy at a... View Obituary & Service Information

The family of Connie Sue (Napier) Pogue (Seymour) created this Life Tributes page to make it easy to share your memories.