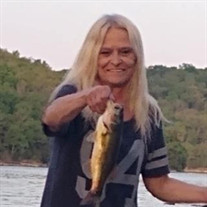 Connie Sue Rice, daughter of Paul and Dorothy Woods Higgins, was born August 17, 1966, in Buffalo, Missouri. She departed this life Friday, October 22, 2021, in Mercy Hospital in Lebanon, Missouri, at the age of fifty-five years, two months, and five days. On May 19, 1983, she was united in marriage to Darren Rice, and they shared twenty-six years of happiness and memories before his passing on October 12, 2009. She was also preceded in death by her parents; a brother, Cliff Higgins; and a sister, Deborah Huckaby. Connie is survived by two daughters, Amanda Richardson, and her husband, Jamie, and Tasha Lorenz, and her fiancé, Bruce Crothers, all of Lebanon, Missouri; a son, Rocky Higgins, and his wife, Misty, of Marshfield, Missouri; a son-in-law, John Roeder; six grandchildren, Kylie Roeder, John Roeder III, Kinzie Roeder, Linzie Roeder, Michael Lorenz, and Matthew Brann; two brothers, Ronnie Higgins, and his wife, Chris, of Springfield, Missouri, and Larry Higgins, of Lebanon, Missouri; two sisters, Brenda Croak, of Springfield, Missouri, and Nancy Carter, of Warsaw, Missouri; a number of nieces and nephews; as well as a host of other relatives and friends. She was born and raised in Buffalo, Missouri, and attended Buffalo Schools. She fought for everything she had and worked many hard hours in the housekeeping department of hotels for several years. She still found time to be a devoted homemaker and great mother. She was a mother hen to everyone but yet continued to have an adventurous spirit. She enjoyed being outdoors where she liked fishing, camping and working in her flower garden. She had a very giving heart and was always willing to help everyone. She loved her family dearly and especially enjoyed time with her grandchildren. Connie was a loving mother, grandmother, sister, aunt, and was a caring friend. We celebrate her life and know that her family and friends will cherish the wonderful memories she made for them during her lifetime. Visitation for Connie Rice will be held Tuesday, October 26, 2021 from 9:00 - 10:00 AM at Holman Howe Funeral Home in Lebanon, MO. Funeral services will be held Tuesday, October 26, 2021 at 10:00 AM at Holman Howe Funeral Home in Lebanon, MO. Burial will take place in Plad Cemetery.

The family of Connie S. Rice (Lebanon) created this Life Tributes page to make it easy to share your memories.