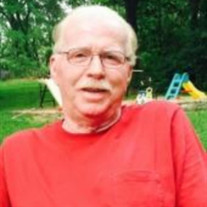 Conrad Herbert “Red” Putnam, son of Hubert and Charlotte (Dumhart) Putnam, was born on November 6, 1951 in North Fort Lewis, Tacoma, Washington. He departed this life on July 15, 2021 in Osage Beach, Missouri. At the time of his passing, he was sixty-nine years, eight months and nine days of age. He was preceded in death by his parents, Hubert and Charlotte Putnam. He is survived by his children, Brian Putnam of Camdenton, Missouri, Tracy and husband James Kreischer of Perry, Georgia and Lisa Putnam of Camdenton, Missouri; three grandchildren, Matthew Kreischer, Rosalee Kreischer and Kennedy Snelling; his wife for many years, Melinda Williams; and Deborah Putnam, mother of Brian and Tracy. He also leaves behind a host of other family and many friends who will all truly miss him. Red spent his younger years in Germany and Japan with his family while his father served for the Red Cross. At an early age, the family moved to the United States, living in Imperial Beach, California. Red later moved to the Lake of the Ozarks in 2000, where he worked as a heavy equipment and plant operator for Scott’s Concrete. In his spare time, he enjoyed smoking cigars and having drinks with his friends, working in his garage, roller skating and dancing. Red also had a passion for woodworking, making many beautiful pieces throughout the years and helping their children craft things for their mother. Above all, he lived life to the fullest and loved being a Papa to his grandchildren. Red was a loving and a caring neighbor and friend. We celebrate his life and his many accomplishments and will treasure the memories he created for his family and friends. Funeral services will be held at 2:00 p.m., Tuesday, July 20, 2021 in Allee-Holman-Howe Funeral Home. Visitation will take place prior to the funeral from 12:00-2:00 p.m., in the funeral home. Memorial donations may be made to the family and left at the funeral home or mailed to, Allee-Holman-Howe Funeral Home, 15 Clint Ave, Camdenton, MO 65020. Arrangements are under the direction of Allee-Holman-Howe Funeral Home of Camdenton, Missouri. To send flowers to the family or plant a tree in memory of Conrad "Red" H. Putnam please visit our Tribute Store.

The family of Conrad "Red" Putnam (Camdenton) created this Life Tributes page to make it easy to share your memories.