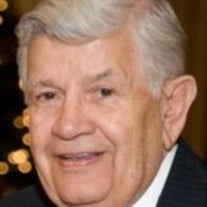 Dale Leonard Dickhans, beloved husband, father, grandfather, great-grandfather and great-great-grandfather, passed away on Thursday, July 22, 2021 in Camdenton, Missouri. At the time of his passing, he was just three months shy of his 92nd birthday. Dale was born in St. Louis, Missouri on October 24, 1929 to Lawrence and Ada (Davis) Dickhans. He worked for the Coca Cola Bottling Company, in St. Louis, for 45 years, starting out at the age of 12 loading trucks. He retired from Coca Cola on October 31, 1986 and moved to his beloved lake house in Camdenton, Missouri on the Lake of the Ozarks. As a young man in his early twenties, Dale was also a member of Company H, 138th Infantry Regiment, of the Missouri National Guard from 1948 – 1954 and was awarded the Company Pistol Marksmanship Trophy in 1951. Dale married the love of his life, Rose Lato, on November 17, 1951. As kids they lived next door to each other on Sullivan Ave. in St. Louis. This union produced five children, Gail Ann, Diana Mary, Kathy Ann, Mark Allen and Karen Ann. Dale loved to spend time with his family boating, first on the Mississippi River and eventually on the Lake of the Ozarks. One of his favorite things to do on the lake when family came to visit was pile them in the boat and, as he called it, go “Honky Tonkin” and hit all his favorite spots on the lake. There were no strangers to Dale. He was known as a very friendly guy who would strike up a conversation with anyone and everyone he happened to be sitting next to. He was also a collector of firearms and a connoisseur and collector of fine junk for resale, as can be attested to by his family. Dale is survived by his wife of 69 years, Rose; his four daughters; 10 grandchildren; 24 great-grandchildren; and one great-great-grandchild on the way. He also leaves behind many other beloved family and friends. He was preceded in death by his parents, Lawrence and Ada Dickhans; his son, Mark Allen Dickhans; and his younger brother, Roland Lawrence Dickhans Sr. Services are under the direction of Allee-Holman-Howe Funeral Home and are incomplete at this time. To send flowers to the family or plant a tree in memory of Dale L. Dickhans please visit our Tribute Store.

Dale Leonard Dickhans, beloved husband, father, grandfather, great-grandfather and great-great-grandfather, passed away on Thursday, July 22, 2021 in Camdenton, Missouri. At the time of his passing, he was just three months shy of his 92nd birthday. Dale... View Obituary & Service Information

The family of Dale Dickhans(Camdenton) created this Life Tributes page to make it easy to share your memories.

Send flowers to the Dickhans(Camdenton) family.