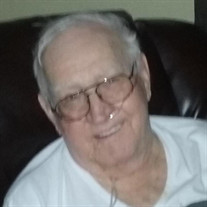 Dale Reed Perry, son of Earl Perry, Sr. and Dovie Reid Perry, was born July 8, 1940, in Kansas City, Missouri. He departed this life Thursday, August 19, 2021, in the Harry S. Truman Veterans Hospital, in Columbia, Missouri, at the age of eighty-one years, one month, and eleven days. On January 15, 1988, he was united in marriage to Ruth Darlene Smith, and they shared the last thirty-three years. He was preceded in death by his parents; three brothers, Earl, Leroy, and Jim Perry; and three sisters, Lois Hargrove, Erylene Perry, and Bonnie Wales. Dale is survived by his wife, Ruth, of the home; two daughters, Jennifer Woodworth, and Jodi Perry, all of Branson, Missouri; a son, David Perry, of Kansas City, Missouri; three step-sons, Billy Smith, of Long Island, New York, Jeffrey Smith, of Roby, Missouri, and Dennis Smith, of Success, Missouri; a brother, Leroy Perry, and his wife, Mary, of Irvine, California; a number of nieces and nephews; as well as a host of other relatives and friends. He was born and raised in the Kansas City area and as a child had a newspaper route and gave the money he earned to his mother. After graduating from high school, he entered the military and served his country faithfully in the United States Navy. He served his first fifteen years with five tours of duty in Vietnam and then served on several U.S. Navy carriers for the next twenty-five years. He served on the USS Bon Homme Richard, the USS Kearsarge, the USS Hancock, the USS Coral Sea, and the USS Midway all during his meritorious career in the Navy. After retiring from the Navy in 1984, he returned to Kansas City and began working as a steel primer, preparing steel beams for the Builders Steel Company. In 2002, he became disabled and he and Ruth purchased a farm near Success, Missouri. They sold their farm and moved into Lebanon, Missouri in 2016. Dale had professed his faith in Christ and was baptized in 2016, in the Lebanon Church of the Nazarene, now Freedom Church of the Nazarene. He greatly enjoyed canoeing in Oklahoma and was a member of the Eagles Organization in Houston, Missouri. His family was very important to him and he enjoyed having special times with all his family when they could. Dale was a loving and devoted husband, father, brother, uncle, and was a caring friend. We celebrate his life and his accomplishments and know that his family and friends will hold tight to the wonderful memories he created for them during his lifetime. Graveside services will be Wednesday, Aug. 25 at 11 a.m. at Missouri Veterans Cemetery in Waynesville. A visitation will be held Tuesday evening from 6 - 7:30 p.m. in Holman-Howe Funeral Home. A memorial has been established to Freedom Church of the Nazarene and may be left at the funeral home.

The family of Dale Reed Perry (Lebanon) created this Life Tributes page to make it easy to share your memories.