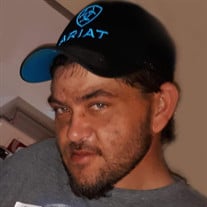 Daniel Lee Hobbs, son of Kenneth Leroy and Shirley Hale Whitaker Hobbs, was born February 1, 1984, in Warrensburg, Missouri. He departed this life Tuesday, November 16, 2021, in Lake Regional Hospital, in Osage Beach, Missouri, at the age of thirty-seven years, nine months, and nineteen days. In September of 2009, he was united in marriage to Jessica Michelle Fisher, and they shared nine years of happiness and memories before Jessica’s passing on July 31, 2018. He was also preceded in death by his father; and his father-in-law, Charles Fisher. Daniel is survived by a daughter, Jada Hobbs, of Buffalo, Missouri; his step-children, Elisa West and Michael West, both of Lebanon, Missouri, and Eric Webb, Jr. and Zachary Webb, both of Lee’s Summit, Missouri; his mother, Shirley Hobbs, of Lee’s Summit, Missouri; a sister, Robin Webb, and her husband, Eric, of Lee’s Summit, Missouri; a niece, Aubrey Webb, of Lee’s Summit, Missouri; as well as a host of other relatives and friends. He was raised in Kingsville and lived most of his life in that area. He worked at the sale barn, did construction work, and then moved to Lee’s Summit to work as a handyman. After he and Jessica were married, they made their home in Lebanon and Daniel worked with his father-in-law and at local sale barns. Daniel was raised in the Kingsville Seventh Day Adventist Church. He enjoyed watching western movies and listening to country music. He liked spending time with his niece, Aubrey, who he cared for from birth until she was six months old. His family was very important to him and he especially enjoyed spending time with them. Daniel was a loving father, son, brother, uncle, and was a caring friend. We celebrate his life and know that he will be fondly remembered and greatly missed by all those who knew and loved him. Funeral services will be Wednesday, Nov. 24 at 2 p.m. at Holman-Howe Funeral of Lebanon.

The family of Daniel L. Hobbs (Lebanon) created this Life Tributes page to make it easy to share your memories.