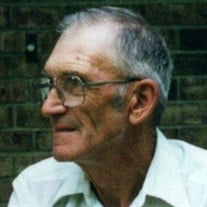 Darius Brill Myers, son of Irvin and Georgia Pline Myers, was born January 25, 1933, near Brownfield, Missouri. He departed this life Tuesday, February 8, 2022, in Mercy Hospital, in Lebanon, Missouri, at the age of eighty-nine years, and fourteen days. On March 17, 1962, he was united in marriage to Janice Faye Savage, and to this union one daughter and one son were born. He was preceded in death by his parents; and seven brothers, Freeman Ogle, Ferman Ogle, Wallace Ogle, Robert Ogle, Junie Ogle, Berlin Ogle, and an infant. Darius is survived by his loving wife if fifty-nine years, Janice, of the home near Lebanon, Missouri; a daughter, Cori Root, and her husband, Alan, of Lebanon, Missouri; a son, Clayton Myers, of Lebanon, Missouri; three grandsons, Daniel, Eric, and Tanner; two brothers, Lonnie Ogle, of Springfield, Missouri, and Keith Ogle, of Lebanon, Missouri; three sisters, Amy Lawson, and Bonnie Derry, both of the State of Indiana, and Colene Lucas, of Richland, Missouri; a number of nieces and nephews; as well as a host of other relatives and friends. He lived most of his life in Lebanon and Laclede County. He joined the military as a young man and served his country faithfully in the United States Army during the Korean Era. After being honorably discharged, he returned to Lebanon where he began working as an automobile body repairman. He worked for over thirty years for Gib Adkins Auto Body Shop. After he and Janice were married, they made their home in the Lebanon area and lovingly raised their family. In his spare time he enjoyed fishing and especially enjoyed having coffee with his friends at the coffee shop each day. His family was very important to him and he especially enjoyed having time with his grandsons. Darius was a loving husband, father, grandfather, brother, uncle and was a caring friend. We celebrate his life and know that his family and friends will hold tight to the wonderful memories he made for them during his eighty-nine years. All services will be private.

Darius Brill Myers, son of Irvin and Georgia Pline Myers, was born January 25, 1933, near Brownfield, Missouri. He departed this life Tuesday, February 8, 2022, in Mercy Hospital, in Lebanon, Missouri, at the age of eighty-nine years, and fourteen... View Obituary & Service Information

The family of Darius B. Myers (Lebanon) created this Life Tributes page to make it easy to share your memories.