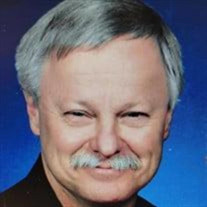 David B. Grant, 72, passed away on Tuesday, February 1, 2022 at home with his family by his side. David was born in Ozark, Missouri, on December 5, 1949 to Berman and Jewell Grant, being the youngest of five children. He graduated from Tuscumbia High School in 1967 in Tuscumbia, Missouri. He was employed at INTERCO, International Shoe Company’s Distribution Center before joining the Air Force in 1969. During his service he obtained the rank of sergeant and was deployed to Korea. David worked in munitions while in the Air Force. He was very proud of having served his country. After returning home from Korea, David began to hunt for a job and worked at some different places. He did find a permanent position at Bill Robert’s Chevrolet Car Dealership in Bolivar. He worked there for 42 years obtaining the position of Parts Manager. David retired on August 31, 2016. David met his future wife, Linda, on a blind date set up by mutual friends. When David finally asked Linda to marry him in January 1980, he had as part of his proposal a request for a certain date to be married on and it had to be February 29. So he said they could either get married in six weeks or wait four more years. They were married on February 29, 1980. Linda got the job done. They were married almost 42 years celebrating 10 anniversaries. It was a very happy and fun-filled marriage. David enjoyed going fishing and in 2017 bought his dream fishing boat so he and Linda could get more fishing done. He also loved gardening and spent hours during the garden season out doing his thing. Many a summer meal was a feast of garden tomatoes, cucumbers, and squash. Lately he had gotten into raised bed gardening and had experimented with rare seeds. Another interest of David’s was Lionel model train sets. His dream was to build a layout that would put to use his many sets he had collected for years. He had started working on his train room by building shelves for his trains to be displayed upon and placing a new floor down. David loved spending time with his family and especially with his kids and grandkids. He will be remembered for his strong quiet character, his quick wit and sense of humor. He was preceded in death by his parents, Berman and Jewell Grant, His sister, Linda Grant Struemph, and his brother, Paul Grant. He is survived by his wife, Linda Farmer Grant of the home, his two sons, J. D. Grant and A. J. Grant, two sisters Joyce Grant Smith (Jim) and Judy Grant Henry (Jr), and many beloved family members. Also an important of David’s family held very closely is Mabel Osborne, Barbara Studt, and Rod Osborne. The many numerous friends David made throughout the years were very special in their own ways and he remembered them. Their love will always be remembered. Services for David will be held Tuesday, February 8, 2022 at the First Baptist Church in Bolivar at 11:00 A.M. A visitation will take place one hour before hand. Memorial contributions may be made to the First Baptist Church of Bolivar. To send flowers or a memorial gift to the family of David Berman Grant please visit our Sympathy Store.

David B. Grant, 72, passed away on Tuesday, February 1, 2022 at home with his family by his side. David was born in Ozark, Missouri, on December 5, 1949 to Berman and Jewell Grant, being the youngest of five children. He graduated from Tuscumbia... View Obituary & Service Information

The family of David Berman Grant (Bolivar) created this Life Tributes page to make it easy to share your memories.