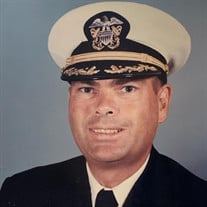 David Benjamin “Ben” Pitts, Sr., son of the late Dillard Blackstone and Maud (McCulloch) Pitts, was born February 15, 1932 in Corsicana, Texas. He departed this life Tuesday, June 1, 2021, at Lakeside Meadows in Osage Beach, Missouri, at the age of eighty- nine years, three months and seventeen days. Ben was a Vietnam veteran, having proudly served his country in the United States Navy for 26 years before receiving an honorable discharge. He attended the Naval War College as well as the National War College and went on to work in the Pentagon. He traveled a lot in the military and was stationed many places across the country and world. Ben worked in many different departments in the Navy; he was a navy pilot, a special advisor for General Alexander Haig, he was responsible with helping Spain get into NATO and was a fleet air wing commanding officer in Hawaii where he and his crew tracked submarines. Ben had a very successful military career, but after retiring he started his hog farm in Grovespring, Missouri; which he successfully ran and operated for 20 years. Pitts hog farm was one of the largest in the area. After the hog farm ceased operations, he transitioned to raising cattle. On December 31, 1954 Ben married the love of his life, Dana Raye McWilliams and she survives of the home in Grovespring, Missouri. Also surviving are his children; Miriam Leigh Rushing and her husband Derk of Miami, Florida, David Benjamin Pitts, Jr. and his wife Dana of Atlanta, Georgia, Daniel Joseph “Dan” Pitts and his wife Lynn of Grovespring, Missouri and Stephen Andrew Pitts of Madrid, New Mexico, seven grandchildren; Elizabeth Anne Pitts, Caroline Raye Pitts, David Benjamin Pitts III, Bradan Joseph Pitts and his wife Savannah, Erin Leigh Hardaway and her husband Sam, Kailey Blaire Pitts and Sara Tess Carpenter and her husband Loyal, two great- grandchildren, Justice Blackstone and Merrick Knightley, nieces, nephews, other relatives and friends. He was preceded in death by his parents and three sisters; Bessie James, Ouida Garrett and Maudine Kilgore. Ben was a loving husband, father, grandfather, great-grandfather, uncle and friend. We celebrate his life, his patriotic spirit and we will treasure the many memories he helped create. A memorial has been established to The Hartville VFW or The Alzheimer's Association. Donations may be left at the funeral home or mailed to the funeral home at P.O. Box 236, Hartville, MO 65667.

The family of David "Ben" Pitts (Hartville) created this Life Tributes page to make it easy to share your memories.